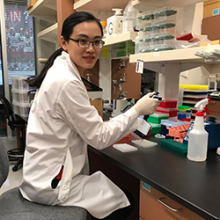 Weizhen is currently a postdoctoral research associate working with Michael Pumphrey and Arron Carter at Washington State University. Her research is to identify and characterize resistance germplasm and resistance genes against stripe rust of wheat (Puccinia striiformis f. sp. tritici) by genome-wide association mapping and QTL mapping in tetraploid (emmer wheat and durum wheat) and hexaploid bread wheat. Weizhen received her Bachelor of Science degree in Biotechnology from Nanjing Agricultural University, China, in 2011. She then joined the Spring Wheat Genetics and Breeding Program for her Ph.D. degree under the supervision of Pumphrey and was awarded her Ph.D. degree in July 2016. Her thesis focused on molecular characterization of stripe rust resistance in tetraploid wheat using genome-wide association study. Weizhen said, “I am eager to join and devote myself to improving wheat yields by fighting against wheat rusts…I can share my identification of resistance loci and DNA markers with other scientists and receive the most professional feedback, which are beneficial to improving my academic skills. And the international collaborations can be built with the leading wheat rust scientists.”