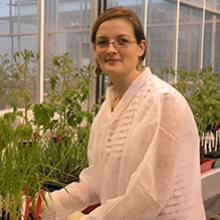 Sarrah completed her Ph.D. in Plant Pathology at Wageningen University and Research Centre, The Netherlands under Pr. Gert Kema. She explored the genome structure and pathogenicity factors of Zymoseptoria tritici, a world-wide devastating fungus causing Septoria tritici Blotch disease (STB). She was awarded a UNESCO-L’Oréal fellowship for her Ph.D. work and is a recipient of the Ritzema-Bos Award for Excellence of the Royal Netherlands Society for Plant Pathology. Sarrah later joined the Biotechnology Center of Borj Cédria, Tunisia, as a researcher/assistant-professor in the Laboratory of Molecular Plant Physiology. Since 2015, Sarrah has become an active member of the Wheat-CRP Tunisia-Septoria Precision Phenotyping Platform led by CIMMYT. that has the role to generate and share data and knowledge on Z. tritici that represents a major threat in Tunisia. Sarrah said, “My passion and commitment to the development of agriculture through exploring ways to increase yield, having more resistant varieties and ultimately eradicate hunger is genuine. I have to admit that being a woman, a mother and a scientist is definitely challenging particularly in a post-revolution country who recently embraced democracy, but we certainly have a crucial role in the scientific development of the country.”