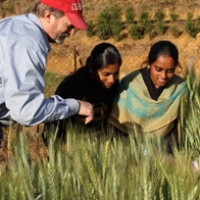 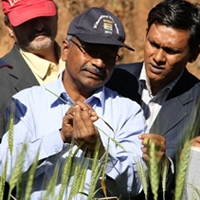 Over the next two weeks, the BGRI will post a series of blogs related to the DRRW-ICAR Wheat Rust Surveillance and Monitoring training program that took place in India from 25 Feb -10 March 2012. 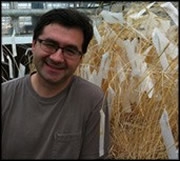 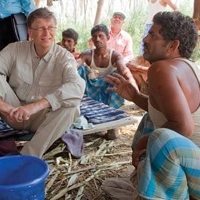 Bill Gates - "In this year’s letter, I focus on food and agriculture (though I also provide updates about all the global health and U.S. education work we do). When I was in high school, a popular book called The Population Bomb painted a nightmarish vision of mass starvation on a planet that has outgrown its carrying capacity. That prediction was wrong, in large part because researchers developed much more productive seeds and other tools that helped poor farmers in many parts of the world multiply their yields. As a result, the percentage of people in extreme poverty has been cut in half in my lifetime. That’s the amazing progress part of the story, and not enough people know it."

Stripe rust epidemics are a recurring threat to wheat yield in the majority of wheat growing regions of the world, with potential to inflict regular regional crop losses ranging from 0.1 to 5%, with rare events giving losses of 5 to 25%. Regions with current vulnerability include North America (particularly Pacific North West USA, Mexico), East Asia (China, north‐west and south‐west), South Asia (India, Pakistan, Nepal), Oceania (Australia, New Zealand), East Africa (Ethiopia, Kenya), the Arabian Peninsula (Yemen), Middle East (Syria, Turkey), Central Asia (Uzbekistan) and Western Europe. A basis for these epidemics has been the progressive emergence of pathogen races in similar patterns to that experienced in Australia. Collaborative work funded by ACIAR in association with international agencies CIMMYT and ICARDA allowed the development and deployment of genetic stocks to monitor race changes in the field across wheat regions in the developing world. 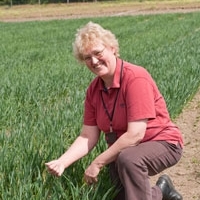 Stripe and stem rust are significant and destructive diseases in wheat, and currently pose the threat of a global epidemic. Dr. Lesley Boyd of the John Innes Centre is leading a vital project to identify and develop new molecular markers for resistance to both diseases. 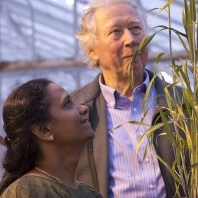 In a paper published in the Proceedings of the National Academy of Sciences, USA (PNAS), Nirmala et al. 108:14676-14681, (2011) describe the isolation and preliminary characterization of two effector proteins that coordinately induce stem rust resistance gene protein product RPG1 to become phosphorylated and initiate disease resistance signaling. The quest for these proteins started with an earlier discovery that Puccinia graminis f. sp. tritici spores initiate RPG1 phosphorylation within 5 minutes of landing on the leaf surface (Nirmala et al., Mol. Plant-Microbe Interact. 23:1635-1642, 2010). This discovery was astounding and indicated that the effectors are already present on the spore surface and that the plant has an early warning system to indicate that the enemy has landed. 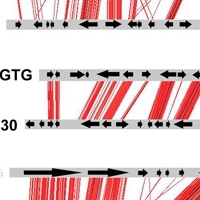 Scientists at the University of California Davis have sequenced and assembled part of the Puccinia striiformis f. sp. tritici genome, a milestone that promises to be a valuable resource for wheat rust research. 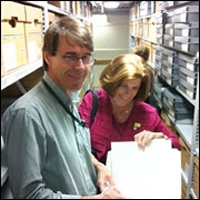 While attending the 2011 Borlaug Global Rust Initiative Technical Workshop in St. Paul Minnesota in June, I had a rare opportunity to visit the University of Minnesota Archives with several colleagues, including Ms Jeanie Borlaug Laube, daughter of 1970 Nobel Laureate Dr. Norman Borlaug. The Archives hold many of Dr. Borlaug's papers, including the first hand written draft of his Nobel Prize acceptance speech. 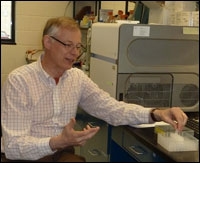 In a paper titled, "Obligate biotrophy features unraveled by the genomic analysis of rust fungi", published in the May 31, 2011 issue of Proceedings of the National Academy of Sciences, USA(PNAS), Duplessis et al. describe the characterization of the genome and transcriptome of two rust fungi, Puccinia graminis f. sp. tritici (Pgt, wheat stem rust pathogen) and Melampsora larici-populina (Mlp, leaf rust of poplar). This represents the first genomes of any rust fungi to be sequenced, and provides the first detail insight into the how these obligate biotrophic plant pathogens are able to cause disease and rapidly evolve to overcome host resistance.