In October 2018, an international team of researchers released a paper that described the main results of the cloning of the highly effective wheat stripe rust resistance gene, Yr15. This discovery, which has great significance for the wheat community, was the outcome of 25 years of research.

The story of Yr15 began in the 1980s, when it was discovered by Z. K. Gerechter-Amitai and A. Grama in wild emmer wheat (Triticum turgidum ssp. dicoccoides). Since the early ’90s, a group led by Prof. Tzion Fahima from the Institute of Evolution at the University of Haifa has worked on the challenging mission to uncover the protein structure encoded by this gene that is highly effective in fighting over 3000 pathogenic strains of Puccinia striiformis f. sp. tritici (Pst) from around the globe.

The first grant proposal aiming to clone Yr15 gene was actually submitted by Prof. Fahima in 1992, when the available wheat genomics tools were close to nothing. Obviously, the proposal was rejected for being “too ambitious,” but he did not give up his dream and kept fighting for it. Now, more than 25 years later and through a long and thorny way, Yr15 has finally been cloned.  Despite an absence of genetic and genomic tools, and absence of faith of grant agencies that rejected proposals aiming to conduct positional cloning in the complex wheat genome, Prof. Fahima’s dream has been realized. 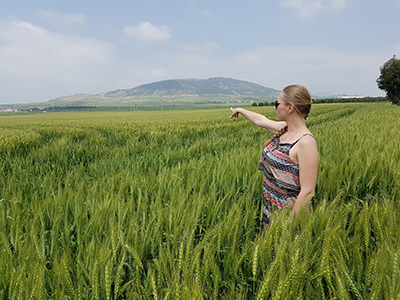 For me personally, it was an honor to join and become a part of the team that worked on the Yr15 cloning for the last 25 years. During this long time, our research team had to rely on the collinearity between the Yr15 gene region on wheat chromosome arm 1BS with the orthologous regions of Brachypodium distachyon, Oryza sativa (rice), and Sorghum bicolor in order to identify wheat expressed sequence tags and exploit them for the development of genetic markers, for chromosome walking towards the target gene. Reference sequences for the enormous sizes of the wheat genomes (tetraploid and hexaploid) were published only recently (Avni et al. 2017; Apples et al. 2018), decades after the Yr15 project was started.

In the absence of a reference genome, Prof. Fahima joined the International Wheat Genome Sequencing Consortium and constructed a gridded 1BS-specific BAC library of Chinese Spring (CS), and later also a wild emmer wheat G25 pooled BAC library to obtain physical map of the Yr15 region. Although the researchers put tremendous effort into the project at that time, the outcome was very limited and slow. Nevertheless, in 2017, Yr15 was finally cloned and the researchers were surprised and happy to discover a unique protein structure for a wheat resistance gene comprised of kinase and pseudokinase in tandem; the gene was designated Wheat Tandem Kinase 1 (WTK1).

The cloning encouraged a fascinating investigation of host-parasite interactions and co-evolution at the molecular level. In parallel to the validation process, which took almost two years, members of the consortium began to work on the mechanism of resistance. This work included various types of experiments and histopathological characterization at several stages of the disease cycle to uncover differences between near isogenic lines (NILs) with/without Yr15 gene, in their response to infection with Pst. As a result, we found that a very early post-haustorial resistance mechanism is activated in the presence of Yr15, causing programmed cell death of the infected cells (hypersensitive response), which results in the blocking of the pathogen invasion.

After releases of wild emmer and bread wheat reference genomes at pseudomolecules level, we were able to make progress with genomic analyses to search for the presence of WTK1 (Yr15) copies among different genomes. Unexpectedly, we found plenty of them, even in susceptible genotypes, meaning that most of them are non-functional (at least in interaction with the tested stripe rust isolate). This finding, together with the presence of similar kinase-pseudokinase resistance genes in barley (i.e. RPG1) brought us to another interesting idea of searching for such protein structures in other plant genomes. It was a real breakthrough to find structurally similar tandem kinase-pseudokinase (TKP) proteins across the plant kingdom, including even moss. We only then realized the importance of our discovery of the TKP protein family, members of which we think are involved in resistance to different fungal pathogens in numerous plant species.

This discovery opens a door for a new field of plant pathology studies. A decoy role was proposed for pseudokinase in the molecular mechanism of resistance provided by TKP proteins and the next step will be to prove or disprove this hypothesis. We are looking forward to see where this story will take us. I truly believe that this is just the beginning of a fantastic scientific tale, which demonstrates the power of collaboration among teams of scientists from around the world to crack old mysteries and pave new ways to secure the global food supply.