A collaborative effort initiated by the South Asian Wheat Disease Consortium during the Borlaug Global Rust’s SAARC training in Nepal, in 2015, resulted in a close evaluation of the wheat yellow rust pathogen population structure in the Himalayan region by Sajid Ali’s group at the Institute of Biotechnology & Genetic Engineering, at the University of Agriculture, in Peshawar, Pakistan. The study involved collaborators from Bhutan, Nepal and Pakistan with financial support from the DGGW, CIMMYT, HEC, Pakistan, the Bill & Melinda Gates Foundation and DFID, UK. 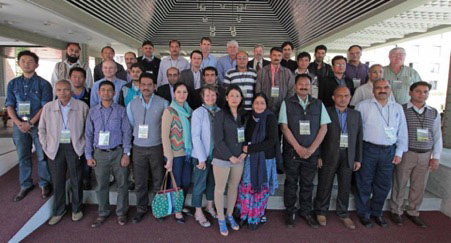 Group photo taken at the SAARC training in Nepal, in 2015, prior to field sampling. Photo by Sajid Ali

The work was published in APS journal “Phytopathology,” and constitutes a part of the PhD work of Muhammad Rameez Khan.

Further surveillance should be made in the Himalayan region for disease management in the region and in the context of worldwide invasions. Previously, invasive strains of P. striiformis introduced into new regions has resulted in huge epidemics across large geographical regions. To avoid such surprises and emergency situations, the authors strongly suggested the need for further collaborative efforts to tackle the disease at national, regional and worldwide scale.