In view of the retirement of Prof Zak Pretorius from UFS later this year, Dr Willem H.P. Boshoff assumed duties in the Department of Plant Sciences in January 2017. Willem will continue and expand research on rust diseases of field crops, teach undergraduate modules in Plant Pathology, and advise post-graduate students on research projects.

"I am looking forward to the opportunity to be directly involved in rust pathology research and to become part and collaborate with the well-established international group of researchers taking on the many challenges that the wheat rust pathogens offer," Boshoff said. 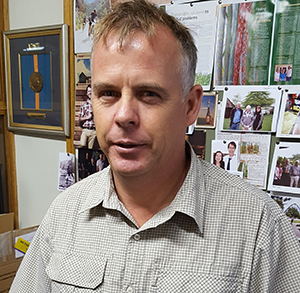 After completion of his BSc Agric. and BSc Agric. Honours degrees in Plant Pathology at UFS in 1995, Willem was appointed by the ARC-Small Grain Institute, Bethlehem, to work on stem rust surveillance and pre-breeding for rust resistance in wheat. He obtained his M.Sc. Agric. degree in 1997 and his PhD in 2001, all at UFS. His master’s study dealt with Fusarium head blight and for his PhD the main focus was on stripe rust occurrence, epidemiology and control strategies. This pioneering study was inevitable after the pathogen had been observed for the first time in 1996, causing extensive and severe epidemics, on wheat in South Africa. After completion of his studies SGI appointed Willem as their spring wheat breeder for the irrigated production regions. In 2003 he joined Pannar Seed (Pty) Ltd. as their winter wheat breeder where he acted as breeding lead since 2006, releasing several successful varieties. UFS is proud to have Willem on board and to know that the long-standing rust program will continue at national and international levels. Willem can be contacted at BoshoffWHP@ufs.ac.za.