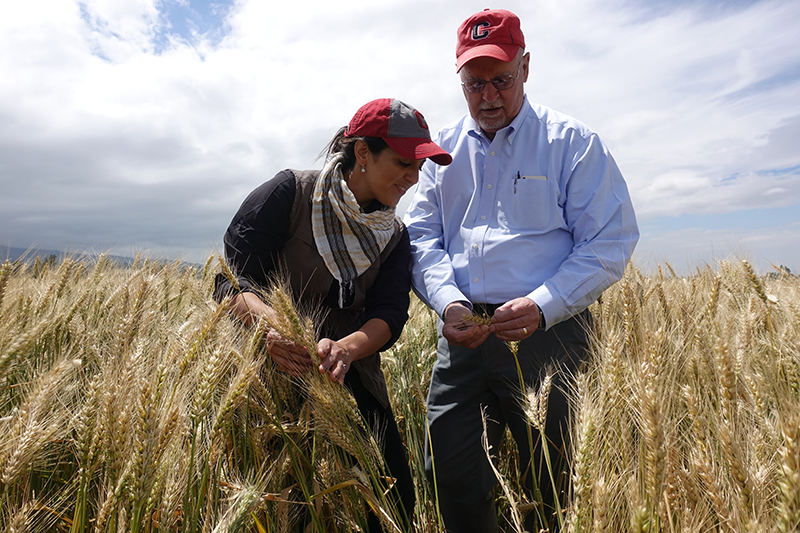 Maricelis Acevedo (left), the associate director of science for the DGGW and Ronnie Coffman (right), international professor of plant breeding and director of International Programs in the College of Agriculture and Life Sciences (IP-CALS). Photo provided

A global alliance of countries and research institutions, including Cornell, committed to sharing plant genetic material, has secured food access for billions of people, but a patchwork of legal restrictions threatens humanity’s ability to feed a growing global population.

That jeopardizes decades of hard-won food security gains, according to Ronnie Coffman, international professor of plant breeding and director of International Programs in the College of Agriculture and Life Sciences (IP-CALS).

“Global food security depends on the free movement and open sharing of plant genetic resources,” Coffman said July 23 at the International Wheat Congress in Saskatoon, Saskatchewan. “Without a strong commitment to scientific exchange in support of global plant breeding efforts, we risk our ability to respond to current food crises and to protect future generations.”

Effective plant breeding programs depend on the exchange of seeds, pathogens, and plant genetic material – known as germplasm – between and among countries. Coordination among plant pathologists and breeders forms a symbiotic partnership as plant and disease specimens collected in countries around the world are sent to research institutions to be analyzed and tested. Those findings in turn inform the breeding of improved, location-specific crop varieties that are resistant to disease and adapted to increasingly unpredictable environmental conditions.

The Convention on Biological Diversity gives countries sovereign rights over their own biological resources. The multilateral treaty, signed in 1993, allows each state to draw up its own regulations. An update known as the Nagoya Protocol, ratified in 2014, has subjected plant breeders and the seed industry to increased legal wrangling. Some countries are particularly draconian in their enforcement, and without a universal legal framework, the uneven standards threaten to undermine scientific exchange, Coffman said.

He argued that current regulations bring international lawyers, accountants and bankers with little to no background in plant breeding onto the playing field of crop improvement to act as referees. The patchwork of laws and norms, which have grown increasingly complicated in recent years, hampers scientific advancement and ultimately harms the farmers who depend on improved crops.

Coffman called for an overhaul of international laws that regulate the sharing of plant genetic resources, and for plant scientists to advocate to protect the unimpeded exchange of material and knowledge.

“It takes an international community of scientists and genetic resources to fight pathogens like stem rust that do not respect international boundaries,” he said. “Stringent regulations and country-specific control are stifling the germplasm exchanges critical to agriculture and horticulture.”

The CGIAR system, and CIMMYT (International Maize and Wheat Improvement Center) and ICARDA (International Center for Agricultural Research in the Dry Areas) in particular, are the conservators of enormous gene banks of germplasm. Those resources have been essential in improving many crops to fight biotic and abiotic stresses.

“Germplasm exchange and information sharing is paramount for global wheat improvement as they are the basis for much of the progress made,” said Hans Braun, director of CIMMYT's Global Wheat Program and the CGIAR Research Program on Wheat. “Going forward, we must protect open access and exchange because the value of germplasm resources in national and international gene banks can only be realized when they are shared and used.”

Hunger and malnutrition cause 9 million deaths globally per year, a number that could skyrocket without an international effort to respond in unison. Annual global losses to crops like wheat could be devastating in the absence of germplasm and effective breeding programs.

Since 2008, the Cornell-led Borlaug Global Rust Initiative has spearheaded efforts to combat threats to global wheat production. There are now approximately 215 million hectares of wheat under cultivation worldwide, most of it genetically susceptible to one or more races of newly identified stem rust and yellow rust pathogens. Highly virulent races of rust pathogens can easily reduce yields by 10% or more. The 1953 rust epidemic in North America resulted in average yield losses of 40% across U.S. and Canadian spring wheat growing areas.

As one part of its efforts to reduce the world’s vulnerability to wheat diseases, the Cornell-led Delivering Genetic Gain in Wheat project – funded by the Bill & Melinda Gates Foundation and UK Aid from the British people – collects samples of plant pathogens such as stem rust and yellow rust from 40 countries and analyzes them in biosafety testing labs in Minnesota, Denmark, Canada, Turkey, Ethiopia, Kenya and India.

The DGGW relies on exchanges of germplasm and rust samples across international borders, and the project has encountered increased regulation in recent years, said Maricelis Acevedo, associate director of science for the DGGW and adjunct associate professor of plant pathology at Cornell.

“It takes an international community of scientists and genetic resources to fight pathogens like stem rust that know no international boundaries,” Acevedo said. “We must continue to protect — and use — those resources in our quest for global food security.”