Ug99 and Somatic Hybridization: An interview with Melania Figueroa 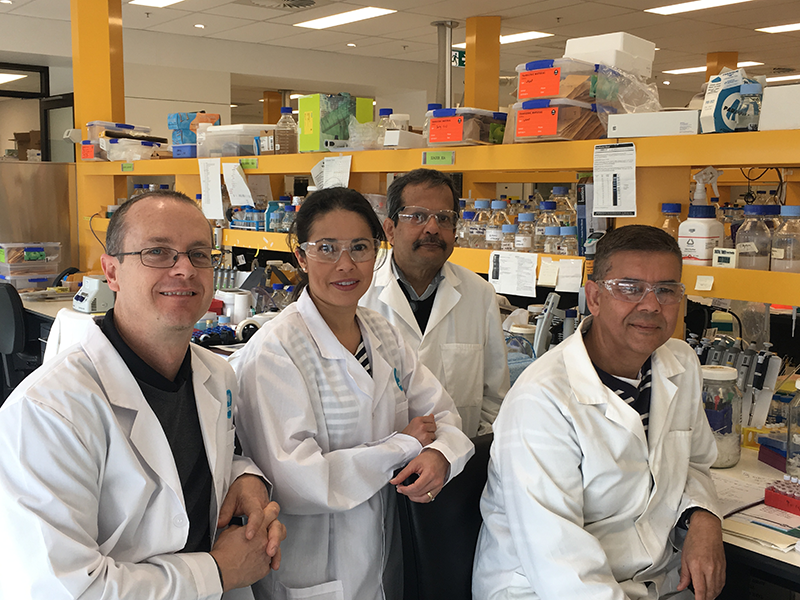 Ug99 was first characterized in Uganda in 1999, but the origin of this particularly devastating race of stem rust has always been a mystery. For 20 years, as it has spread to more than 13 countries, scientists have wondered: How did it happen? Was barberry involved? Was sexual reproduction involved? Or was it a mutation caused by radiation at high elevations?

The answer couldn’t be more tantalizing — and the cause of excitement and consternation in the global wheat community.

Using a comparative genomics approach, Melania Figueroa and her collaborators, led by Dr. Peter Dodds, at the Commonwealth Scientific and Industrial Research Organisation (CSIRO) in Australia have uncovered the novel truth that somatic hybridisation was involved in the creation of Ug99 — that two donor nuclei came together.

The article, "Emergence of the Ug99 lineage of the wheat stem rust pathogen through somatic hybridisation" was published in Nature Communications in November 2019.

“Rusts are probably the most complicated pathogens you can ever encounter,” said Figueroa, in a recent interview with the BGRI. “They have a complex life cycle, and that cycle includes one portion that deals with sexual reproduction. And for that, you need barberry in the case of wheat stem rust. The other portion of the life cycle is what we call asexual or clonal reproduction. So, you could imagine this is like you could clone yourself a million times, and there's a million copies of you.”

Human genetic material is contained in one nucleus. But, genetic material is separated in two nuclei in rust. This fact contributed to Figueroa’s discovery that the two strains of rust can fuse in a process called somatic hybridization. For the last five years, Figueroa has been working on her hypothesis that diversity of genetic components from two different donor nuclei is important for the evolution of the pathogen, something she first considered when working on sequencing the genome of oat crown rust at the University of Minnesota. Her hypothesis was borne out in genomic testing using PacBio sequencing and Hi-C data.

“Hi-C really allows you to scaffold information gathered by long DNA reads, but [the technique] also allows assessment of distances between DNA fragments,” said Figueroa. “And so, you could ask the question, ‘What is the likelihood of this fragment of DNA being closer to this older fragment versus another fragment?’ And then, you could ask the question, ‘Is this fragment likely to be in this nucleus or a different nucleus?’ ”

Twenty years ago, PacBio sequencing and Hi-C data technologies were not available. Now that they are, scientists like Figueroa are in a position to explore these technologies and understand much more about the biology of organisms like rusts. 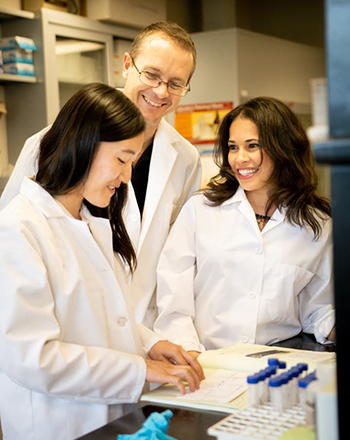 “Somatic hybridisation is basically a process in which two strains of rust will fuse at some point. And we think that these happen in wheat during the vegetative growth of the fungus,” said Figueroa. “So, the two strains would fuse and exchange material. So, in this process, one of the strains actually donated one nucleus to the other strain, and that was the birth of Ug99.”

The discovery has troubling implications for the evolution of other races of rust in geographically disparate parts of the world. The fact that rust organisms have the capacity to hybridise and generate new combinations of genetic material, means that rust organisms can generate new combinations and defeating resistance genes that have been deployed and are still effective.

For Australia, in particular, it means that, like Ug99, a new strain introduced into the continent could hybridise with another strain to provide variability in the population.

Figueroa would like to see rust surveillance undertaken in a global approach. If people were not providing strains for analysis, scientists would not be able to conduct this kind of research, she says.

“The more coordination we have, the better,” said Figueroa. “And the more that we work as a team, the better. And I think it's also important that we look at some of these other strains that are non-Ug99 related.”

Figueroa credits the BGRI’s global coordinated approach over large geographical areas of the wheat producing world as important in the progress that has been made to making wheat more secure over the last 12 years.

“Do we have many races? Do we have a few?" she asks. “Really, what we are observing in the field is just a combination of the haplotypes that exist. But how many are there? You add mutation to the mix, and then, yeah, we have a very, very complicated story.”

WHAT IT MEANS FOR THE FUTURE

Somatic hybridization means that gene stewardship is more important than ever. “As scientists go to relatives of wheat to obtain new genes that could be introduced into wheat varieties, even though we characterize that pool as quite large, we have to be careful that we're not exhausting that resource,.”

Said Figueroa, “We have to be really mindful that the resources we are developing are going to last or at least we are doing the best to make them last. Once a gene is deployed in the field, in a cultivar, and is exposed to the rust, that rust could evolve and overcome the resistance gene(s) in that variety”. Figueroa sees potential to tailor strategies of gene deployment based on information that we have that is specific to rust haplotypes.

A HUMBLING EXPERIENCE and CLEVER PATHOGENS

What’s it like for an early-career scientist like Figueroa to be involved in proving such a startling hypothesis?

“It's that moment in science when you stop and you think how much there is to be learned about nature, about biology, about pathogens,” she said. “And it is a humbling experience because you realize that we don't know very much. This is just a scratch on the surface. And I think, once again, rust is telling us that they are very clever pathogens and it is not an easy fight. We're dealing here with a pathogen that is very clever and it has many weapons.”

TAKE HOME MESSAGE
Knowing about the biology of rust and knowing how genetic mechanisms work means that scientists are more equipped to fight rust. Not only do they have to be careful with barberry, they also have to be careful about introducing new strains of rusts, because the introduction of new strains to a particular region means that hybridisation could occur, and result in another significant outbreak, according to Figueroa.

“We have to be very vigilant, consider all possibilities, respond to those possibilities, apply our skills, and apply our technology to really get to those answers,” said Figueroa. “I think this is a really exciting time in science.”

This research was supported by the 2Blades Foundation, USDA-Agriculture and Food Research Initiative (AFRI) Competititve Grant (Proposal No 2017-08221), a USDA-NIFA Postdoctoral Fellowship award (2017-67012-26117), an ARC Future Fellowship (FT180100024) and the University of Minnesota Lieberman-Okinow and Stakman Endowment.