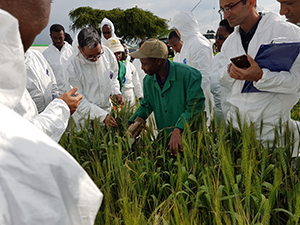 Researchers and mentors in the field

The course aims to create awareness of the threat of rusts on wheat production; train wheat research scientists on new approaches in fighting the rust diseases (including genetics, pathology, breeding, and molecular genetics); and teach common approaches in identifying, scoring, and evaluating rust diseases both in the field and experimental plots. Practical demonstrations focused on rust methodologies and hands-on experience in recording disease scales both in the greenhouse and field, according to Dr. Sridhar Bhavani, CIMMYT Wheat Pathologist/ Breeder and course coordinator.

The participants had the opportunity to utilize the East African component of the Borlaug Global Rust Initiative (BGRI) and Delivering Genetic Gains in Wheat (DGGW) project in Kenya. These are designed to monitor further migration of Ug99 and its variants; facilitate field screening of international germplasm; identify new sources of resistance; understand the genetic basis of resistance; develop durable, targeted breeding programs; and enhance the capacity of national programs. There was also the opportunity for participants to interact with international scientists, and for trainers to learn of emerging problems from the participants. 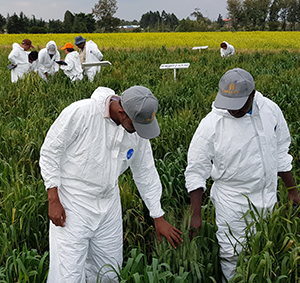 Training was opened by Dr. Immaculate Maina, Center Director, KALRO, Njoro. Reiterating the importance of the course, Dr. Immaculate noted that diseases, particularly rusts such as Ug99, pose great threat to wheat production and subsequently food security, She emphasized on the importance of training to impart knowledge and understanding of rust diseases and effective measures to control diseases from causing devastating epidemics

Besides technical aspects of the training, participants were updated on the status of wheat rusts worldwide, and how individual countries are dealing with the threats. Several researchers from CIMMYT, Australia and ICARDA delivered lectures during the training course. The annual course is part of the wider BGRI/DGGW Project in Kenya, an initiative of Cornell University that is being implemented by CIMMYT and KALRO in collaboration with 16 other research institutions worldwide, and supported by the Bill & Melinda Gates Foundation and the UK Department for International Development.