Last month I had the opportunity to visit Morocco to meet with wheat colleagues at ICARDA-Morocco.  It was my second trip to Morocco, and some of you may remember my visit in 2014  (http://www.globalrust.org/blog/searching-answers-weeds-wheat-fields-morocco ). This year, Filippo Basi (durum wheat breeder at ICARDA-Morocco), Lee Hickey  (Senior Research Fellow at The University of Queensland) and I visited the wheat and barley fields of Morocco together again, spending long days cruising the country to visit research stations, take notes and samples, and evaluate the full potential of the new durum and bread wheat varieties for dry areas of the world.

We also took the opportunity to visit the ENA Meknes University where students joined us in the field for a lecture on practical approaches to wheat breeding and pathology. Fernanada Gamba, visiting scientists and cereal pathologist (Facultad de Agronomía de la Universidad de la República del Uruguay) was also traveling with us. Fernanda’s passion for applied research in managing wheat diseases brings her to Morocco every year for several weeks to conduct research, mentor students and offer her expertise to the ICARDA wheat team.

As we traveled the country, we took the opportunity to savor some of the delicious Moroccan cuisine, which includes delicious wheat bread and dishes, many of which are based on durum wheat, not common wheat.  My favorite wheat recipe is the Moroccan-style couscous, made with semolina; but in the morning there is nothing better than the sweet, yellowish bread, ‘Harcha,' made with durum wheat flour and semolina!

Rust is a Continuing Challenge

In 2014, leaf rust was the main concern. We were not surprised to find it again due to the conducive environmental conditions for leaf rust development and the diversity of the pathogen in the region. However, this year, yellow rust caused by Puccinia  striiformis f.sp. tritici, (Pst) was widespread in the wheat fields we visited and the wheat fields we passed by the road. This is evident on the pictures taken, the samples collected and our daily tweets.

Yellow rust on bread wheat variety in farmer fields (A and B) and on research plots at the Tessaout research station (C).

Since 2000, Pst races adapted to higher temperatures have plagued the wheat fields in zones previously considered too warm for Pst epidemics. New Pst races with virulence of previously effective and highly utilized resistant genes have been recently identified in East Africa and North Africa, Europe and Asia (Bhattacharya, 2017).  Some of these races are the main suspects of the disease incidence observed in the wheat fields in Morocco this year as they were also reported in 2016.

In addition to yellow rust, stem rust caused by Puccinia graminis f.sp. tritici (Pgt) also infected the durum and bread wheat fields in Morocco. Since 2016, stem rust epidemics have made their comeback in the Mediterranean  (see: Caution: risk of wheat stem rust in Mediterranean basin in the forthcoming 2017 crop season following outbreaks on Sicily in 2016 (http://wheatrust.org/news-and-events/news-item/artikel/caution-risk-of-stem-rust-in-eastern-mediterranean-basin-in-the-forthcoming-2017-season-due-to-ou/ ). Stem rust epidemics were observed in Sicily for the first time in many decades and were caused by Pgt isolates characterized as belonging to race TTTTF.  These isolates were highly virulent on durum wheat. Stem rust was also observed during the same season in Spain and Morocco. In my visit to Morocco, samples were collected for characterization by colleagues at the Aarhus University rust reference laboratory in Denmark.

Drought is Becoming a Greater Challenge

As wheat production continues to face new challenges and wheat demand continues to increase in a growing world, we cannot miss the opportunity to learn more about the challenges that wheat is facing due to climate change. ICARDA specializes in breeding crops for arid regions. Thus, their wheat team is experienced in breeding and selecting for drought-tolerant wheat. As the arid regions of the word expand and droughts during the wheat growing seasons become more prevalent, the research conducted by ICARDA scientists becomes more relevant than ever. On this trip, I had the opportunity to learn more about drought tolerance and its genetic basis when I visited the wheat plots at the Annoceur research station, where the current wheat crop has only received minimal precipitation since it was planted.  We will talk more about drought research, in a future blog. 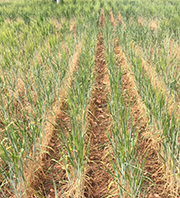 The work of the wheat research community is more important than ever before as biotic and abiotic stresses threaten wheat production, smallholder farmers’ livelihoods and food security globally.

For this and other reasons, the BGRI invites all of you to join us in Marrakesh, Morocco on April 14-17 of 2018 for the 2018 BGRI Technical Workshop.  The meeting will focus on Delivering Genetic Gain in Wheat by targeting research on farmer-relevant traits and “Exploring New Challenges in Wheat Research.”