On October 20 to 22, 2019, a crew of pathologists including Dave Hodson and Yoseph Alemayehu from CIMMYT, Maricelis Acevedo from Cornell University, Habtamu Tesfaye from EIAR and myself, Pablo Olivera Firpo, from the University of Minnesota, participated in a wheat stem and stripe rust survey trip in the Ethiopian regions of East Shoa, Arsi, and S.N.N.P. 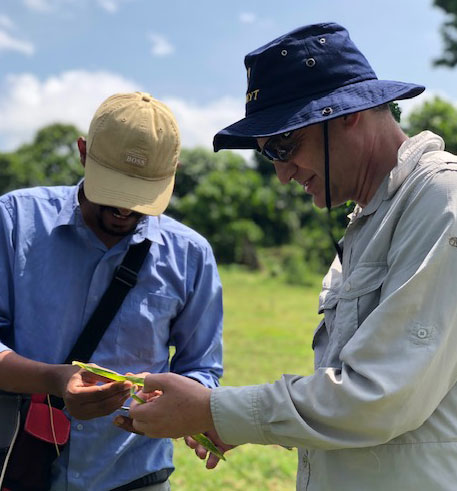 “This was a great opportunity to visit farmers’ fields and wheat plots at research stations to monitor the level of rust diseases present in wheat crops, and to collect samples for race analysis,” said Maricelis Acevedo, associate director for science for the Delivering Genetic Gain in Wheat (DGGW) project.

We surveyed about 60 bread and durum fields and research plots. In the majority of the visited fields, we observed healthy crops of wheat with none to limited rust infection. Fungicide applications coupled with the strong rains and lower temperatures that occurred during the months of September and October may have limited the development and spread of rusts — in particular stem rust — in the wheat growing regions we visited.

The highest disease severity was observed in a few stripe rust-infected fields. Other than rusts, we observed fusarium scab in several farmers’ fields, with disease incidence reaching up to 20 percent infection.

These survey trips were a fantastic opportunity to interact with Ethiopian wheat farmers, to communicate and learn from them, and to link production with research. From the conversations with growers it became clear that additional efforts are needed in the diagnostic of rusts and other emerging diseases — like fusarium scab — that threaten wheat production in Ethiopia.