Spain serves as a potential bridge for pathogen movement and wheat rust infection between Africa and Europe and an important country in which to conduct barberry and stem rust surveys. Additionally, endemic and unique species of barberry such as Berberis vulgaris subsp. seroi in the north, and B. vulgaris subsp. australis in the south, could serve as alternate hosts for wheat stem rust and stripe rust pathogens.

Dolors Villegas (IRTA) and Carlos Cantero-Martínez (University of Lleida) followed a north-south transect of 14 sites in seven provinces, from Huesca in the north (up to 30 km from France) to Cádiz in the south (60 km from Tanger in Morocco) to obtain representative samples in spring and summer of 2019. They had help from Fernando Martínez-Moreno and Ignacio Solís (University of Sevilla) who collaborated in the sampling of Granada and Cádiz provinces. 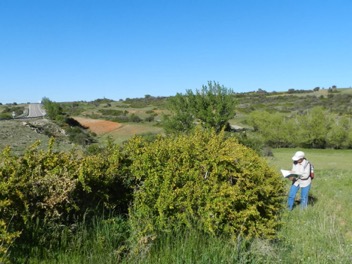 Dolors Villegas takes notes in the field in Bronchales (Teruel province), Spain, on May 31, 2019. Photo by Carlos Cantero-Martínez

Surveying was made possible with the support of the Delivering Genetic Gain in Wheat (DGGW) project.

A total of 95 samples of infected barberry leaves, and stem rust in crops and grasses were taken in relevant sites, and sent to Dr. Yue Jin at the USDA-ARS Cereal Disease Lab (CDL) in Minnesota for analysis. In some cases, not only was stem rust detected, but also yellow rust, which is a severe problem in wheat. Barberry samples were shared with the Global Rust Reference Center (GRRC) in Denmark, along with all relevant yellow rust samples found in related crops.

The stem rust infection in durum and bread wheat from Lleida was very rare as it had not been seen for decades at that site. Sites in the Huesca and Teruel provinces, where barberry and cereal crops coexist and unique virulence combinations were previously detected, were surveyed at several dates (eight sampling dates in total, spaced one to four weeks apart, depending on the site) to obtain a complete sequence of events during the development cycle for both barberry, and cereal crops as well as rust pathogens.

“We hope these efforts will help the wheat rust community better understand the roles of the alternate hosts in rust pathogen variations and disease epidemiology in the Iberia Península, and help build knowledge for better crop protection for the region and beyond,” said Maricelis Acevedo, associate director for science for the DGGW project.