Since 2011, wheat scientists in South Asia have been using the SAARC Surveillance Tool Box application, developed by Sathguru Management Consultants, of Hyderabad, India. The tool box captures relevant information pertaining to wheat like growth stage, date of planting and field size as well as information related to incidence, severity and infection type of disease. It also captures latitude, longitude and elevation to track the exact location of data collected. The rust survey application is user-friendly, works well on web and tablet devices and can be easily installed on any android device.

Diligent analysis of surveillance data provides an understanding of the incidence and severity of the dreaded wheat rust and other diseases in South Asia and allows farmers to take necessary measures to mitigate them.

Participants in surveillance training at Ludhiana line up for a group photo.

To gear up for the upcoming wheat season in the SAARC region, pre-season surveillance training using the tool box was conducted by Sathguru Management Consultants in India at the Indian Agriculture Research Institution, Indore, and at the Plant Breeding and Genetic department, Punjab Agricultural University, Ludhiana, on December 7 and 12, 2017, respectively.

Trainings started with opening remarks by Dr. Gyanendra P. Singh, Director, Indian Institute of Barley and Wheat Research, who said, “The tool box is user-friendly and is assisting us in capturing all the surveillance information easily.”

His remarks were followed by a presentation from Dr. David Hodson, senior scientist, International Maize and Wheat Improvement Center (CIMMYT-Ethiopia), who gave an overview of Global Wheat Rust monitoring activities with an emphasis on the current situation and implications for South Asia. 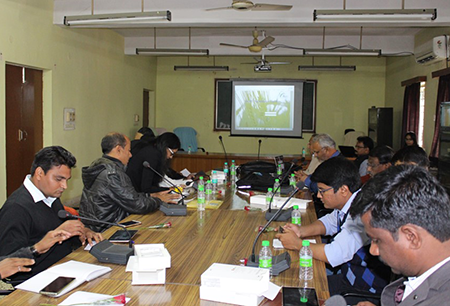 Participants are recording data from the surveillance tool box during training.

In all, 25 wheat scientists from all the major wheat research stations in India received training, including breeders, pathologists and other senior scientists. Among them were six female participants. Similar trainings are being conducted in other South Asian countries on a regular basis.

One of the participants, Dr. Pradeep Singh Shekhawat, a wheat pathologist with the Rajasthan Agricultural Research Institute, said, “The tool box is easy to work with as it does not need a wi-fi connection to capture data. The training was very informative and the tool box is very useful in capturing surveillance data.”

Extensive surveillance activities in the eight countries involved in the South Asian Association for Regional Cooperation (SAARC) region helps wheat scientists track the spread and severity of disease, identify resistant varieties, and develop plans for mitigation. It is an important tool in increasing wheat productivity.