Nepalese and CIMMYT wheat scientists, working at the Nepal Agricultural Research Council (NARC) and the International Maize and Wheat Improvement Centre (CIMMYT) suspect new races of stripe and leaf rust infected the wheat crop in the Nepal hills and terai in the recent 2020 wheat season. This was reported after detailed survey and surveillance activities of rust diseases in the terai and hill regions were carried out during March and April, before the COVID-19 pandemic forced the cessation of many field activities.

Stripe rust appeared at epidemic levels in the mid and far western hills whereas leaf rust attacked parts of the mid and western terai. Most of the popular hill wheat varieties, such as WK1204 (80S), Dhaulagiri (90S), Danphe (spike infection) and farmers’ local varieties were heavily infected. Losses due to stripe rust in the western hills were as high as 50% to 60% depending upon time of planting and varieties. Early planted wheat fields showed less stripe rust severity. In the terai, the most popular wheat varieties, such as Bhrikuti, NL297 and Vijay, were heavily infected by leaf rust. Bhrikuti showed susceptibility to stripe rust in the hills while Vijay was found susceptible to both stripe and leaf rust in the terai. 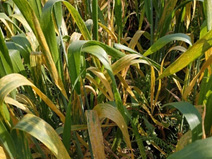 The current outbreak of stripe rust in the hills is comparable to what farmers in the Nepal hills experienced in the stripe rust epidemic from 2005 to 2007. At the time, Nepal had not seen such a heavy leaf rust infestation since 1980.

Recently released varieties such as BL 4341, Bandganga, Sworgadwari and some new pipeline genotypes such as NL 1327, NL1369 (both biofortified), BL 4818, BL 4868, WK 1712, WK2286 and WK 2422 were observed to be free from leaf and stripe rust infection and need to be released soon to replace susceptible varieties. Wheat scientists have warned seed entrepreneurs and farmers to limit the use of seeds of susceptible varieties of wheat next season. 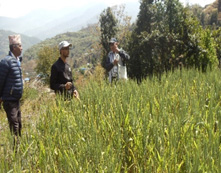 "This wheat season, Nepal has witnessed a yellow rust epidemic in the hills and a medium level leaf rust epidemic in the terai,” said Madan Bhatta, wheat breeder and former director of NARC’s germplasm division. “The majority of the popular wheat varieties have shown susceptibility to newly evolved pathotypes of leaf (121R60-1 = MHTKL (77-9) and yellow rust (110S119 and 238S119) which are also recently reported from India, Pakistan and Bangladesh. Bangladesh reported leaf rust epidemic for the first time. “

As of early May, the samples collected from the team’s most recent visit to the western part of Nepal are yet to be sent to Shimla and Aarhus University in Denmark because sending is difficult due to the Covid-19 lockdown.