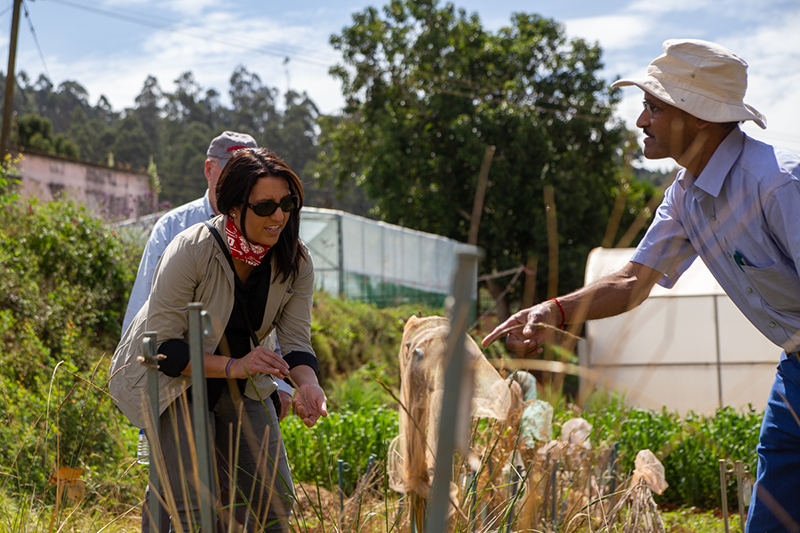 In the worst years of the rust disease epidemic that decimated North American wheat fields in the 1950s, fungal spores riding wind currents across the continent reached into the sextillions — that’s a number with 21 zeros.

Wheat breeders face a daunting task trying to defend against such a relentless barrage of evolving pathogens. In the battle, scientific ingenuity confronts biological innovation: wheat varieties that contain single disease-resistant genes can be easily overrun by rapidly evolving spores.

To safeguard food supplies and ensure durable disease resistance in wheat, scientists must embrace a globally integrated strategy that deploys resistant genes in a coordinated way, according to Maricelis Acevedo, associate director of science for the Delivering Genetic Gain in Wheat (DGGW) project.

“We need to be smart about gene deployment,” Acevedo said at the All India Wheat and Barley meeting Aug. 25 in Indore, Madhya Pradesh.

“If we don’t change our mentality, we risk reliving the worst horrors of the past and the widespread hunger that results when rust diseases wipe out the wheat supply,” she said.

Acevedo cautioned that the release of susceptible or vulnerable varieties at a national level weakens wheat resistance on a global scale. Varieties with only one major effective resistance gene, which may appear adequate to withstand disease pressure in a field trial, are at increased risk to disease pressure when released into circulation. Varieties with only a single resistance gene risk tainting an otherwise effective gene for everybody and imperiling the wheat crop around the world.

Varieties with five to six disease-resistance genes make it mathematically unlikely that spores will have the genetic ability to defeat the resistance. Minnesota scientists in 1985 calculated that the probability a pathogen contains virulence to all six major genes is more than four times greater than the number of spores released in a single year in the US under stem rust epidemic levels.

To reduce the chances of selection in pathogen populations, often caused by major genes, breeders exploit combinations of genes that may provide partial resistance to a broader number of races. 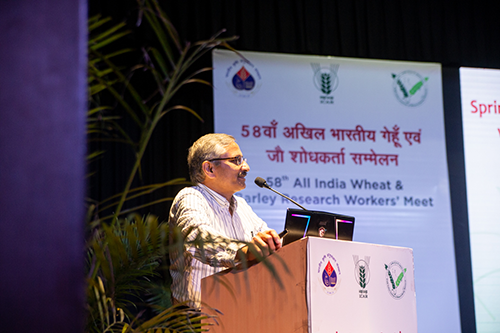 Ravi Singh gives his presentation at the All India Wheat and Barley meeting in Indore. Photo: Matt Hayes / Cornell

While only releasing varieties with stacked genes is the most prudent breeding strategy, there are factors that incentivize shortcuts, according to Acevedo. Plant breeders in some countries are often promoted based on the numbers of varieties released — not for their long-term usefulness. And, in some countries, there are political incentives to provide farmers with new varieties year after year rather than release fewer, but more durable varieties.

Teams of plant breeders employed by National Agricultural Research Systems in countries around the world develop improved crop varieties. Many wheat breeders receive lines from CIMMYT, the International Maize and Wheat Improvement Center, which national scientists then cross with local varieties to adapt to local conditions. National scientists also breed their own from existing local varieties. The process to develop and release any new variety can take up to ten years and up to 15 years to make it to farmers fields.

“A way to make varieties more durable for resistance to rusts is to use marker-assisted introgression of multiple resistance genes using speed breeding in recent varieties or promising varietal candidates, which also possess some of the known durable adult-plant resistance genes,” said Ravi Singh, distinguished scientist and head of Global Wheat Improvement at CIMMYT. The All India Wheat and Barley meeting was co-sponsored by CIMMYT and the International Center for Agricultural Research in the Dry Areas (ICARDA).

The Borlaug Global Rust Initiative (BGRI) was established at Cornell to reduce the world’s vulnerability to stem, yellow and leaf rusts of wheat. Acevedo said the BGRI’s main impacts have resulted from scientific collaboration, commitment to pathogen monitoring, and development and deployment of rust resistant varieties. The BGRI established a Gene Stewardship Award in 2012 to encourage the release of varieties with complex and diverse disease resistance.

Those efforts have proven successful: on Aug. 24, in a reported delivered at the All India Wheat and Barley meeting, ICAR announced that India for the first time produced more than 100 million tons of wheat in a year.

DGGW is funded by the Bill & Melinda Gates Foundation and UK Aid by the British people.