“A reddish-brown, windborne fungus known as stem rust re-emerged as a threat to the world’s wheat crop in Uganda in 1998 and new races of stem and yellow race have been evolving ever since then,” said Maricelis Acevedo, associate director for science of the Delivering Genetic Gain in Wheat (DGGW) project at Cornell University, USA. “The so-called Ug99 pathogen and its variants have unique virulence to which a large proportion of the world’s wheat varieties lack resistance. Outbreaks of wheat rust pose a threat to global food security.”

Capacity building and training are important aspects of the DGGW in preparing scientists to monitor and combat the disease, she said.

“Under the DGGW, collaborative agreements with national governments and agencies are in place to improve the in-country capacity to screen thousands of wheat samples from every continent to identify disease- and heat-resistant lines,” said Acevedo. “Resources are also being invested to strengthen the pipeline to train young scientists in at-risk countries, both men and women. The 2017 SAARC course is an excellent example of this.”

As an indication of the international concern regarding this threat to South Asia, the course in Kathmandu drew participants and trainers from Pakistan, Nepal, India, Afghanistan, Bangladesh, Bhutan, Ethiopia, Kenya, Australia, South Africa, Mexico and the United States. 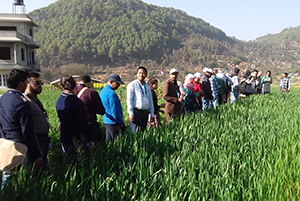 NARC organized the 2017 SAARC Wheat Rust Training Course with the DGGW and Sathguru Management Consultants, India. The course is the sixth such event held in South Asia, resulting in ever increasing, interconnected scientific capacity to deal with the threat of wheat rusts in the region.

There were 24 course participants, of which five were women, including wheat scientists, technical and extension officers, graduate students, and research assistants. Trainees were exposed to rust pathology, pathogen surveillance, field and laboratory techniques, plant breeding, and statistics. They learned to update global surveillance data using modern information technology tools known as the SAARC Toolbox, a kit that includes a Rust Survey app developed by Sathguru that works on hand-held tablets. The data is fed into each country’s surveillance database, and ultimately into a global Rust Mapper.

Using lectures and other materials from the 2015 SAARC course, multimedia specialists from Cornell University have also created an online course on the “Art and Science of Rust Pathology and Applied Plant Breeding” that is available to the global wheat community.