The inaugural wheat season for the Seed Systems for Nepal Initiative has successfully concluded, with a total of 14 metric tons of ‘disease-free’ wheat seed produced by 150 farmers using the new seed processing unit inaugurated earlier this year by delegates from Nepal, Cornell University and the partnering bodies of the Delivering Genetic Gain in Wheat project (DGGW), at the Agriculture and Forestry University (AFU) in Chitwan, Nepal.

“They could have produced perhaps an additional 6 to 8 tons, but since this is the first time that farmers have been trained to produce disease-free wheat seed, this is a good accomplishment by AFU,” said Kannan Vijayaraghavan, chairman of Sathguru and a key partner in the DGGW project. 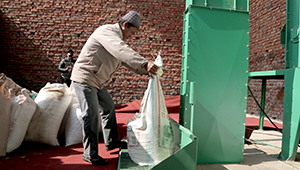 High-quality seed is vital to establishing food security in South Asia. Processed seed has more reliable germination and is screened for disease, ensuring more uniform performance of adult plants in farmers’ fields. This is particularly critical as farmers are beginning to adopt wheat lines that are higher-yielding and resistant to rust. However, most farmers are not engaged in seed production, and harvest seeds in amounts too small to be accepted by commercial seed processors.

“In a three year span we should see farmers get higher yield and better prices for their crops,” Vijayaraghavan added. “Farmers are going to be trained to also use proper seed planting methods to preserve genetic flow.”

The university aggregates seeds from farmers in the area and runs them through the equipment in the new seed processing unit, which is a scaled-down version of machines commonly seen in larger agricultural facilities. At full capacity, the unit can run up to 18 hours a day and process one ton of seed an hour. It is also capable of processing rice and maize during other cropping seasons. The university is also looking to engage the farmers or community growers for multiplying the grower seeds. 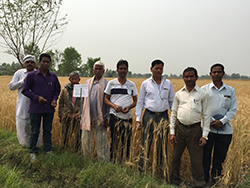 “We are excited to be part of this seed project, and develop an ecosystem to deliver quality seeds to farmers,” said Arjun Shreshta, planning director at AFU. “The Chitwan region is a fertile agriculture zone with immense potential for quality seed production. Our efforts will strive to make AFU the seed hub of the region.”

While the first phase of the initiative has focused on the low altitude region of Nepal, the initiative hopes to expand to help farmers in mid-altitude areas. More than 2,000 farmers applied to be part of the inaugural cohort of farmers trained in producing wheat seed. The seeds initiative intends to double the number of trained farmers next season.

The Seed Systems for Nepal initiative is managed by the DGGW and Sathguru Management Consultants, in cooperation with the AFU and the Nepal Agricultural Research Council. Funding for the DGGW is provided by the UK Department for International Development under their UK Aid program and the Bill & Melinda Gates Foundation.