Ruth Wanyera has spent more than 30 years working in plant protection in Kenya. She enjoys walking the crop, but the main motivation for the 67-year-old pathologist is people — not plants. Having grown up in a farming family in rural Kenya, weeding and harvesting, fetching water, and making sure that everybody was fed, she is adamant about it.

“We want to feed the people. We don’t want people to go hungry. And we have to do something to make sure there’s food on the table,” she said. “Let’s feed the world. Let there be food for people to eat, or for people to survive.”

In 2020, Ruth will retire from her position as senior research officer and head of the plant pathology section of the Kenya Agriculture and Livestock Research Organization (KALRO), in Njoro. From the inception of the Borlaug Global Rust Initiative, she has served as national wheat research program coordinator. 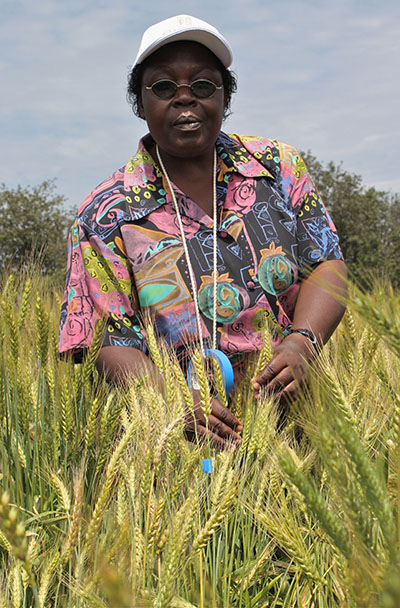 Is It Really Stem Rust?

Given her passion for crop protection, it is no surprise that this hunger fighter was in on the ground floor of the war on stem rust. Ruth started seeing stem rust in the field as early as 1990 — 9 years before Ug99 was identified in Uganda — but her identifications were brushed aside.

“Around 1990, I had an experiment in the field on wheat. When I went to take my notes, I realized there was no yellow rust. Instead, it was stem rust. And I asked myself, ‘Stem rust from where?’ ” The second time, a farmer came to report something strange in his field that he could not identify. “Again, I told them, ‘This is stem rust,’ and again, they brushed it aside.”

William Wagoire reported the incidence of stem rust in Uganda, in 1998, and it was identified and confirmed by Zak Pretorius at the University of South Africa, in 1999, as a new race, Ug99. Subsequent stem rust differential sets and surveys in Kenya confirmed Ruth’s earlier identifications.

Sounding the Alarm from Nairobi in 2005

Ruth was also in on the international effort to sound the alarm about this particular race of stem rust, to which 80% of the world’s wheat was susceptible. She was present in Njoro when Norman Borlaug came to take notes on the stem rust differential lines, and she remembers him saying, “All is not lost. We can get something. We can recover something.” And she was present at the meeting in Nairobi, in 2005, when Norman Borlaug, Ronnie Coffman, Hans Braun, Bob McIntosh, Miriam Kenyua, Ravi Singh and others sounded the alarm and laid out a strategy and a plan to arm the world’s smallholder farmers with rust resistant varieties of wheat.

Breeding, capacity building, surveillance and Ruth’s participation in the quest for rust resistance has been funded under the Cornell University-led BGRI’s DRRW and DGGW projects, launched in 2008 and funded through March 2020, by the Bill & Melinda Gates Foundation (BMGF) and UK Aid, under the Department for International Development (DFID), in partnership with KALRO and other institutions.

As a member of the KALRO team, Ruth has been involved in the release of more than 15 adult plant resistant varieties of wheat to fight the stem rust race Ug99. And she has been central to the team that evaluates various wheat lines in Njoro’s research fields, working with breeders to develop the capacity to evaluate 50,000 different wheat lines annually.

Even though a lot of progress has been made, rust pathogens continue to challenge wheat breeders. “You see, it’s mutating,” said Ruth. “But I don’t think Norman Borlaug will say now that this thing is mutating, ‘let’s give up’. No, I’m sure he will tell us to keep on running after it.”

The Challenge is the Yield

For Ruth, it is not just disease identification by pathologists and resistance that breeders are pursuing. The challenge is also in the yield.

“If I tell farmers to grow particular varieties because they are resistant to Ug99, then the first question is ‘How much does it yield?’ The challenge is to get a better and high-yielding variety that is also resistant to Ug99,” said Ruth.

Impact of the Borlaug Global Rust Initiative in Kenya

1) Since 2006, more than 169 varieties of wheat with improved agronomic traits, climate resilience and disease resistance have been released to farmers in 11 at-risk countries. In Kenya, 17 high-yielding stem rust resistant varieties have been released.

2) The new wheat varieties in Kenya have yield potentials of 5.5 t/ha to 7.1 t/ha which is 15-40% higher yields than previous varieties.

4) The Kenya Agriculture & Livestock Research Organization (KALRO) established a national seed unit at KALRO, in Njoro, Kenya, where close to 1,500 tons of pre-basic/certified seed were produced with an average of 150 tons of certified seed made available to farmers every year over the last decade.

5) The Phenotyping platform at KALRO Njoro has played an important role in the identification of new resistance in wheat germplasm. Over 700,000 accessions of bread wheat, durum wheat, rye and barley from 25 countries have been screened in international screening nurseries in Kenya and Ethiopia since 2006.

6) Kenya has played an important role in the capacity building of national partners. Training courses at KALRO Njoro designed to train wheat breeders and pathologists from public and private sectors in Africa, Middle East, Central and South Asia on stem rust, evaluation of germplasm and standardization of note taking have taken place annually since 2008.  There have been numerous opportunities to mentor and pass knowledge to a new cohort of MSc and PhD trained scientists to backstop future innovativeness.

7) In 2015, the Kenya team — and Ruth Wanyera among them — was awarded the BGRI Gene Stewardship Award to recognize outstanding contributions in wheat research and development. This video https://www.youtube.com/watch?v=Xv_ucLqoTEU  outlines the KALRO team’s achievement.

Also important to Ruth is validation from the farmers. The breeders send advanced varieties into national yield trials whose best performers are subsequently validated in farmers’ fields. Farmers are involved in the process of choosing the varieties they will plant, and again, during agricultural shows and farmers’ field days, when farmers have the chance to see the crop for themselves.

“In this way, farmers get varieties that are good for all the agro-ecological zones in Kenya, from lowland altitudes to highland environments,” said Ruth.

Since 2005, when she first started working on this project, Ruth has seen an improvement in the food security of Kenyan farmers who are growing wheat. In 2005, many had given up growing wheat because of the rust. Now many have taken it up again. Of that progress, Ruth is proud. “We needed to make sure we safeguard the livelihoods of the families, especially the small-scale rural families. It started with the food.”

In answering questions in the field about crop protection, Ruth interacts with farmers from all spheres of life. And, there, she became interested in rural women farmers who, she says, do most of the work with hardly any financial support. “These women need advice and support to improve their daily activities so that they can sustain their families.”

For her efforts, Ruth received a two-year African Women in Agriculture and Development (AWARD) Fellowship, in 2009. Through this mentor-mentoring and pay-it-forward award, Ruth has encouraged many young women. “My desire is to fully incorporate women’s participation, including girl children, in the development process, emphasizing the need to design and implement programs to provide productive resources to rural women. This is a process of change that brings benefit to all people, particularly to the poorest of the poor.

“There is a lot of gender imbalance among wheat farmers, as well as rust researchers in Africa,” she said. “To engage and build women’s capacity, we need to do a lot of coaching and mentoring, which will in turn improve the livelihoods of many farmers in Africa.”

Ruth received the BecA-ILRI Hub’s Africa Biosciences Challenge Fund Fellowship in 2011-2012, an award she used to determine different populations of wheat stem rust in the four wheat growing regions of Kenya, a fellowship co-funded by AWARD. With it, Ruth was able to enroll for her PhD studies at Egerton and write her PhD thesis.

The path Ruth took as a young woman from a small rural village in Kenya to becoming one of the foremost plant pathologists in East Africa led from maize farming to fetching water from the river, to six years in the Soviet Union pursuing her graduate and post-graduate education. As a young girl, she worked on her parents’ farm, especially during school holidays. She said her parents were advocates of everybody in the family attending school, whether a boy or girl. She completed her BSc and MSc in Agriculture and Crop Protection (Plant Pathology) at the Ukrainian Agricultural Academy in Kiev in 1981.

“It was my first time to be out of my country, to be away from my parents. I was still young,” said Ruth. “What I knew was, the crops were there. The diseases were there. From the word go, I liked the subject and just moved on with it.” Even though instruction was in Russian, and research plots were some 600 kilometers from the university, her supervisor came often to the field to see what she was doing and help her take photos. “The learning environment was very good,” she said.

Back in 2011, when the DGGW project was in its infancy, in an interview in St. Paul, Minnesota, Ruth talked about what she was hopeful for: “We are hoping with time we should have introduced as many varieties as possible and we should have educated the farmers. There should be some sustainability. We should be able to continue breeding for more resistant varieties so that at any given time, the farmer is given something that is resistant to Ug99 or any other disease or rust.”

As the following sidebar illustrates, much that Ruth has hoped for — and more — has been accomplished.