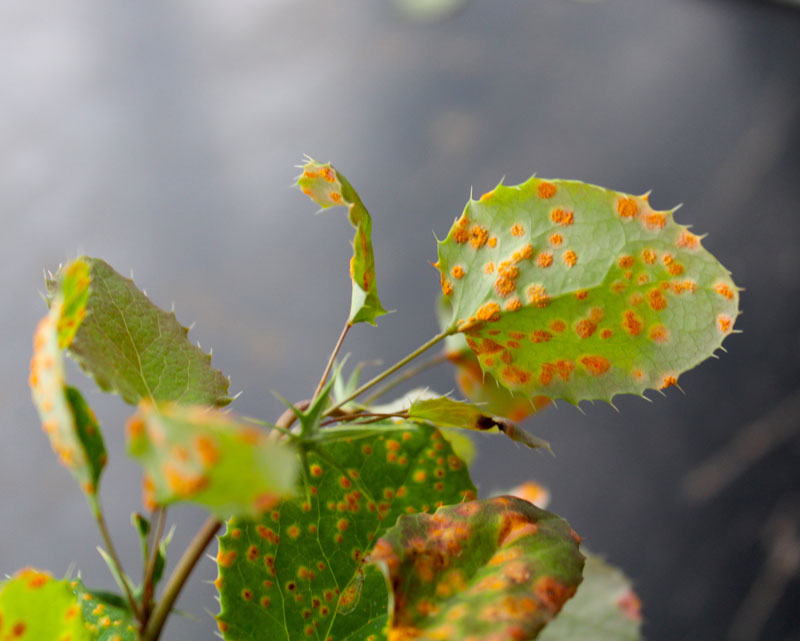 Like us, plants are awash with micro-organisms, some of which contribute to their overall well-being, some of which seem no more than neutral passengers, and some of which can cause disease. We refer to this last group as pathogens. Under natural conditions, plants are continually exposed to immense numbers of micro-organisms with the potential for pathogenicity, but disease remains the exception rather than the rule.
One reason for this is the extreme host specificity of most would-be pathogens. For example, the wheat stem rust pathogen (Puccinia graminis) attacks wheat, robbing it of nutrients, rupturing its tissue and reducing yields by as much as 100% in severe cases, thereby threatening food security; but rice is simply not troubled by it. Indeed, more often than not, a devastating pathogen on one species may have absolutely no effect on another. This phenomenon of resistance, in which an entire species is resistant to all genetic variants of a known pathogen on another species, is referred to as non-host resistance. Have you ever had a bad case of stem rust on your arm? Thank non-host resistance!
As the most common form of disease resistance and one that possesses intrinsic durability, non-host resistance presents a compelling strategy for achieving broad-spectrum, durable protection against many plant pathogens, including wheat stem rust — if only we could understand its mechanisms! In his dream for tomorrow, Dr. Norman Borlaug envisioned the transfer of non-host resistance from rice to wheat, solving once and for all via biotechnology the age-old rust problem plaguing one of humanity’s most important staple crops. In practice, however, the genetic basis of non-host resistance is difficult to study because a non-host species is, by definition, uniformly resistant to the pathogen in question. Genetic studies of disease resistance typically require groups of related individuals that differ, or “segregate”, in their responses to a pathogen. But if non-hosts are uniformly immune, how can we investigate the genetics of non-host resistance?
As one way around this seeming impasse, we decided to turn our attention away from rice and instead focus on a thorny, woody shrub most people know from the ornamental landscaping trade: barberry. Barberries are a compelling platform for the study of non-host resistance to the stem rust pathogen for several reasons. Unlike rice, which has no known co-evolutionary relationship with the stem rust pathogen, barberries are thought to be among the first families of plants to be parasitized by the rusts. In fact, the modern day stem rust pathogen likely evolved from ancestral plants belonging to the barberry family prior to its more recent expansion to the grasses. It begs the question: might we discover new ways of dealing with the stem rust pathogen in wheat and other small grains by better understanding the mechanisms of non-host resistance exhibited by some species of the pathogen’s ancestral host, barberry? 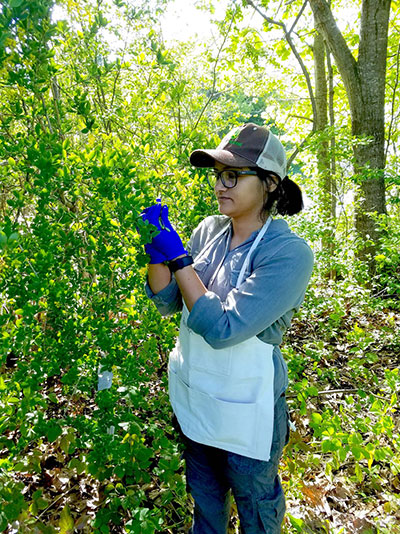 Radhika Bartaula takes samples of barberry as part of her research into stem rust disease. Provided


There are an estimated 500 species within the highly diverse barberry (or Berberis) genus. Some of these species are susceptible to infection by the stem rust pathogen (i.e. they are hosts) but many others are not (i.e. they are non-hosts). For example, while European barberry (B. vulgaris) is a host, Japanese barberry (B. thunbergii) is not. Because hybridization between such host and non-host species are known to occur in nature, we decided to investigate the use of such an interspecific hybrid as a means of dissecting Japanese barberry’s defense strategy against this complex pathogen.
We began by studying natural populations of the interspecific barberry hybrid to determine whether or not they segregate for stem rust resistance. Artificial inoculation with the stem rust pathogen revealed that the non-host resistance exhibited by Japanese barberry does indeed segregate within a population of first-generation (F1) interspecific hybrids with European barberry. With this result, we concluded that we had a potentially viable system for “seeing” the genes underlying the non-host resistance in Japanese barberry. In other words, it seems we had found a way around the genetic impasse encountered in rice.
Building upon this initial result, we invested in the development of a new, larger population of full-sibling F1 hybrids between a European and a Japanese barberry line. The purpose of this bi-parental hybrid population was to “map” the non-host resistance exhibited by Japanese barberry. In other words, with this population, we hoped to begin the formal study of the genetics underlying this resistance, including the number of genes involved, their locations in the genome, and ultimately their identities. To facilitate this work, we constructed the first genetic linkage maps for both parental species and assembled and annotated a chromosome-scale reference genome for Japanese barberry. Using these genetic and genomic resources, we were able to detect a small region associated with non-host resistance to the stem rust pathogen on the short arm of chromosome 3 of Japanese barberry.
While we’ve come a long way in establishing barberry as a viable platform for studying non-host resistance to the stem rust pathogen, clearly this work is just beginning. We believe that insight into the mechanism of disease resistance in the ancestral host may contribute to the global effort to develop durably-resistant varieties of wheat. Our hope now is that other research groups may take interest in the groundwork we’ve laid and collaborate with us on the way forward.
Want to learn more? Check out the paper “Mapping non-host resistance to the stem rust pathogen in an interspecific barberry hybrid” and discover more about the Hale Lab. Connect via email with Iago Hale and Radhika Bartaula, and follow Radhika on Twitter @Radhikabartaula
Iago Hale is associate professor of specialty crop improvement at the University of New Hampshire; Radhika Bartaula, a 2018 Women in Triticum (WIT) Early Career Award winner, is a postdoctoral researcher at the Cereal Disease Lab, USDA-ARS