Kashiram Khanal, one of the farmer leaders from the Torikhet cluster of the Chitwan region, is one of many farmers who are benefiting from the Seed Village Model at the Agriculture and Forestry University (AFU) in Nepal. “The University was here for a long time, but only now we feel its existence through the seed village model. I am very happy that I can discuss my problems and get solutions from experts,” said Khanal.

As a means of improving their livelihoods, the seed village model was conceptualized under the Delivering Genetic Gain in Wheat (DGGW) project (2016-20) to facilitate access to quality certified wheat seeds for smallholder farmers in the terai region of Nepal.

After having put systems and processes in place in the first two years, the focus for the third year (2018-19) was on implementing best practices to improve productivity. That multi-pronged approach included frequent interactive sessions with farmers by the DGGW team with AFU to ensure strict enforcement of agronomic practices. Those practices included: timing of sowing, increased seed rate, spacing between rows, application of fertilizers based upon nutrient profiling of the soil, and good pest and disease management. 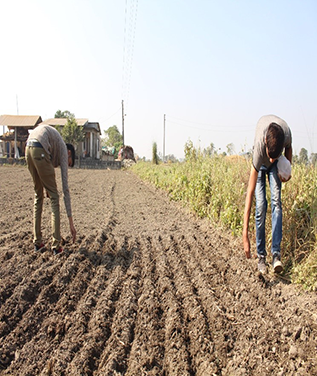 To demonstrate best practices to the farmers, the DGGW /AFU team created demonstration plots in a few farmers’ fields. The team also organized visits by experts from Nepal and India to interact with farmers and share best cultivation practices. Interactive farmer field schools were organized on farmer fields to address the problems faced by the farmers and provide them with practical solutions. Farmers were also exposed to and trained in the use of mechanization in their fields, including the use of seed-with-fertilizer drills, cultivators, and rotovators for increasing precision seeding during sowing. These practices resulted in higher productivity and reduced labor and time.

All of these efforts paid off. The combined result led to 117 farmers from the Chitwan region achieving a 2.7-fold increase in yields in 2018-19 as compared to the previous year (2017-18). These farmers were satisfied and happy to achieve this significant increase in yields of the popular variety Gautam, from 1.8MT/ha in previous year to 2.45 MT/Ha in the 2018-19 season. Demonstration plots established in each of the eight clusters in the farmer fields yielded an average of 3 MT/Ha. In one field, a phenomenal yield of 4.6 MT/ha was reported, suggesting that yields can be further improved.

Along with increased yield, the farmers are also benefiting from the seed-buy-back strategy of AFU, as they are guaranteed more income than they got before moving to certified wheat seed production.

As preparedness for the next season, and in an attempt to promote adoption of new and improved varieties of wheat in the region, AFU undertook research trials of eight recently released varieties by Nepal Agricultural Research Council (NARC). Among the eight varieties tested, BL-4407, BL-4341 and Banganga demonstrated higher yields (above 3 MT/Ha) as compared to the currently popular Gautam variety (2 MT/Ha) which is more than a decade old.

Witnessing the success of farmers in the third year, an increased number of farmers enrolled for the fourth season. In the current 2019-20 season, 221 farmers have partnered with the project, covering about 110.7 hectares under seed production. With reinforcement of the training and practices of the previous season, farmers are anticipating good yields in 2020.

The seed system project at AFU is being carried out under the DGGW project which was funded by the Bill & Melinda Gates Foundation and UK aid from the British people. The project is executed by AFU team with guidance from the Sathguru Management Consultant team.