COBBITTY, NSW: Wheat rust experts from around the world consider the University of Sydney’s Plant Breeding Institute (PBI), in Cobbitty, New South Wales, a “mecca” of cereal breeding and rust pathology. So, it was no surprise that over 300 of them took advantage of the opportunity to tour one of PBI’s two sites on September 20, as participants in the 2015 BGRI Technical Workshop and the International Wheat Congress (IWC).

Many of the world’s foremost plant pathologists and wheat breeders were trained at Cobbitty, among them Ravi Singh, Harbans Bariana, Davinder Singh, Sridhar Bhavani, and Kumarse Nazari.

“The PBI covers all aspects of plant breeding and its associated environments,” noted Robert Park, the Judith & David Coffee Chair of Sustainable Agriculture and the director of the GRDC-funded Australian Cereal Rust Control Program, or ACRCP, in welcoming the group to PBI at Cobbitty.

The University of Sydney has conducted research on the rust of wheat continuously since 1920, in a rust scientist pedigree that traces its lineage from the leadership of W.L. Waterhouse, to Irvine Watson, then Robert McIntosh and now Robert Park.

Watson purchased the original property at Castle Hill, where PBI was established in 1953. The new site at Cobbitty was officially opened in September 1991, with generous support from the Grains Research Development Corporation, or GRDC. PBI is one of the largest groups involved in cereal rust research in the world and today has 12 faculty, nine technicians, and 15 PhD students.

Cereal rust, plant breeding and horticulture are the main areas of interest for the Institute which conducts applied and basic research on cereal genetics relevant to various fungal rust diseases, improvement of cereal resistance to these diseases, and on the causative pathogens. Work includes rust resistance testing and pre-breeding services to all cereal breeding programs in Australia; rust resistance gene discovery and characterization, and the transfer of new genes into adapted germplasm; national surveillance of cereal rust fungal pathotypes present in the Australian cereal belt; advice to producers and breeders on rust-resistant cultivars. PBI’s website claims that their breeding philosophy is “minimum inputs for maximum outputs.”

During the morning tour September 20, PBI had arranged for PBI faculty and students to staff eight mini research stations. They demonstrated wheat-rust-related technologies like inoculation, race analysis, non-host resistance, alternate hosts, molecular cytogenetics, and a $45,000 PCR machine, among others, deftly fielding some pretty tough questions from the well-informed group as we went.

The infrastructure in the growth chambers within the greenhouse structures is remarkably complex. Even though it rarely goes below freezing in NSW, each chamber has its own air-handling ducts, temperature and humidity controls. This keeps rust cross-contamination to a minimum and allows for many multiples of trials with various pathogens.

In the afternoon, following a hearty noontime BBQ and social hour, we donned white haz-mat suits to venture into PBI fields and tunnel houses for more show-and-tell. By the end of the day, we had seen a variety of cereal grains, and any number of rusts on various hosts from wheat to barley, oats and myrtle. 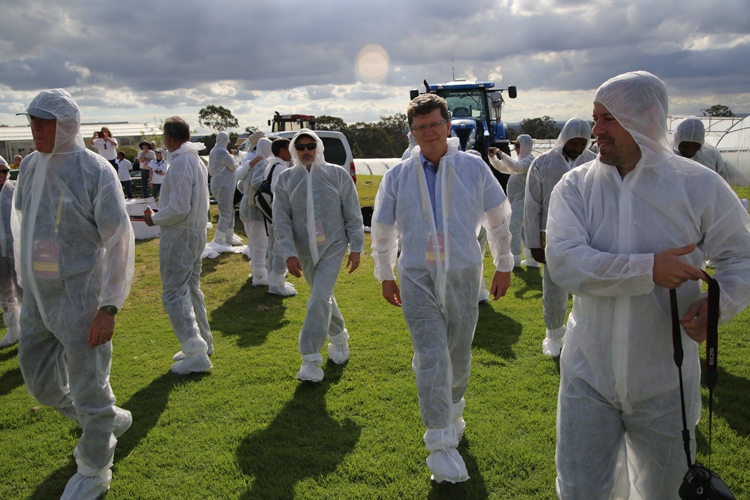 (center) Mogens Hovmüller and others head for the fields at PBI in the protective suits worn as precautionary measures to prevent the possibility that participants will carry rust spores on clothing back to their home countries. Participants were advised to launder all clothing before returning home.
L.McCandless
“I remember my time here so well,” said Kumarse Nazari, a cereal pathologist for ICARDA and one of the world’s foremost authorities on yellow rust who was clearly moved to be back at Cobbitty. “PBI defined who I am as a scientist. I consider myself forever fortunate to have studied here.”