“My father would be immensely proud to have his name associated with such a visionary and impactful endeavor as the Dr. Norman Borlaug International Centre for Agriculture Development,” she told the more than 600 faculty, students and farmers gathered at the University of Agricultural Sciences (UAS)-Dharwad, on January 5, 2018, to launch and dedicate the new center. “This endeavor promises to educate young people to address the challenges of a food-insecure world and forge collaborations with institutions working on agriculture, nutrition and health in Karnataka and beyond, including the College of Agriculture and Life Sciences at Cornell University (CALS).” 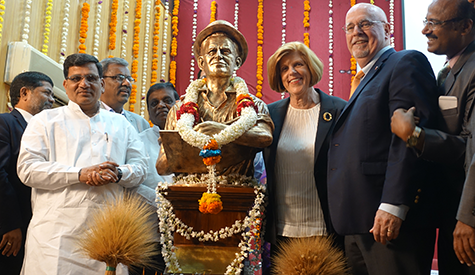 Jeanie Borlaug, Ronnie Coffman and many Indian notables were present to unveil the statue of Norman Borlaug and launch the Dr. Norman Borlaug International Center of Agriculture and Development at the University of Agricultural Sciences-Dharwad, in India, on January 5, 2018. Photo by Linda McCandless

“If Norman Borlaug were here today, he would remind us that investment in agricultural science and development is the means by which we can fight poverty and secure the world’s food supply,” said Coffman. “Such investment is even more critical in today’s politically insecure and climate-challenged world.”

One of the most notable collaborations involves wheat scientists who are working on creating resistance to biotic and abiotic stresses, and tracking deadly wheat pathogens under the Borlaug Global Rust Initiative  The BGRI — of which Jeanie Borlaug is the chair and Coffman the vice-chair —was created under the leadership of Norman Borlaug.

“Like many of the other agricultural universities in India, UAS-Dharwad has been an important collaborator in developing rust resistance wheat (DRRW) and delivering genetic gain in wheat (DGGW),” said Coffman. “These projects are funded by the Bill & Melinda Gates Foundation and the Department for International Development of the UK (DFID), under UKAid.” 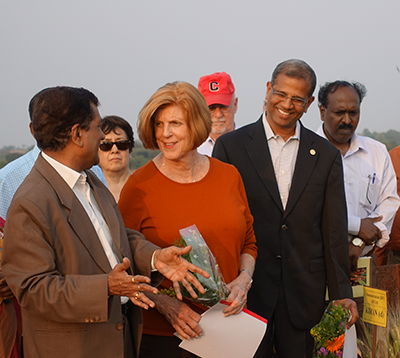 Former Vice Chancellor R.R. Hanchinal talks to Jeanie Borlaug (center) about field trials of improved wheat, along with Cornell faculty during a tour of UAS-Dharwad on January 4. Photo by Linda McCandless

“The seed village concept developed by UAS-Dharwad brings together farmers, public universities and private enterprises as partners in pre- and post-harvest activities to produce high-yielding, safe and nutritious food,” said K.V. Raman, associate director for special projects at IP-CALS. Cornell, UAS-Dharwad and Sathguru are now involved in a similar seed village concept in Malawi under the Agricultural Innovation Partnership (AIP), funded by a three-year, $3 million grant from USAID.

Raman led a previous AIP project, under the 2012-15 Obama Singh Initiative, in which Cornell helped revise the curriculum in agriculture, seed and food science in five agricultural universities in NE India — a project that UAS-Dharwad joined with United States-India Educational Foundation funding.

The Borlaug Centre will also play an important role in connecting UAS-Dharwad with the global community in providing training and research opportunities for international students, faculty and visiting scientists from all over the world. Cornell and UAS-Dharwad have participated in two decades of exchange activities among students, faculty, and administrators.

“Norman Borlaug’s legacy and his contributions in bringing the Green Revolution to India will be forever honored through the work of this centre,” said D.P. Biradar, who will never forget meeting Dr. Borlaug when he was a graduate student. “As Dr. Borlaug would have wished, we are committed to the development and adoption of new agricultural technologies, collaboration and scientific exchange, and educating young people about food, environmental resources, and agricultural systems.”