I am about to finish my PhD in wheat rust genetics at the Plant Breeding Institute (PBI), at the University of Sydney. I have recently submitted my thesis and I’m currently waiting for reviewer’s report. Throughout my PhD, I have worked on rust resistance in wheat. I’ve focused on gene discovery and the development of molecular markers closely-linked with rust resistance genes using genomic resources and fine mapping of closely linked genes Yr47 and Lr52.

I became familiar with wheat breeding during my undergraduate studies and later chose to concentrate on wheat for my Master’s research project. Later on, I joined a research institute in Pakistan as a Plant Pathologist, and I learned even more about wheat research. While working on a collaborative project with CIMMYT, ICARDA, USDA, my efforts were recognized and I was selected for the Dr. Norman E. Borlaug International Agricultural Science & Technology Fellowship. Under this fellowship, I worked at CIMMYT for 3 months in the Wheat Improvement program and for 2 months at the University of Minnesota, Washington State University, and in Kenya on wheat rusts. Working with leading wheat scientists inspired me to become a part of wheat community, and I started my PhD in wheat research. 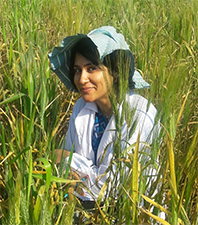 Winning the WIT award was a momentous step forward in my professional career. It provided me the opportunity to connect with international scientists and gave me greater insight into efforts to combat the threat of rust disease for global food security. This experience gave me confidence and motivated me to work harder. Being a WIT awardee also gave me an opportunity to attend the Women Leaders in Science Workshop, which was an incredible experience and invaluable for my career.

I would invest in new technologies and policies that would provide faster and higher yielding wheat varieties to the farming community. The most important aspect worth is investing in is training to farmers regarding disease awareness and crop health. I would also invest in collaborations so that scientists from different parts of the world can work together for sustainable agriculture. I would too invest in increasing gender equality because women play critical role in agriculture.

The advice I would like to give to women in agricultural science is to believe in themselves. There are no shortcuts to success but working hard and working for a better cause will help them to succeed.