“This excellently prepared training helped in building team working skills via several team building activities and games. And it helped in gaining leadership tools such as effective communication, setting priorities, conflict resolution, making us aware of imposter syndrome, and how to be coached and be a coach.” So said Bharati Pandey of her experiences at a Borlaug Global Rust Initiative (BGRI) sponsored leadership training course in December. The young wheat scientist works on abiotic stress in the school of biotechnology at Bhabha Atomic Research Centre, in Mumbai, India.

“Some day I would like to be a principal investigator, but I don’t feel I have the needed tools or even know how to be a true leader,” said Valentyna Klymiuk from the University of Haifa. “The course was an amazing platform to learn what being a true leader means, realize my weak points as a leader, and acquire tools and techniques to improve.” 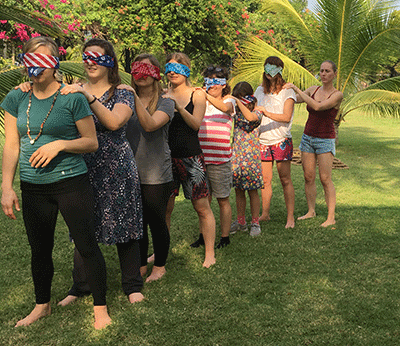 In this team building exercise, Valentyna Klymiuk (in the rear) is directing the blindfolded team to find various objects, competing with another team (not shown).

Pandey and Klymiuk joined 12 other scientists to learn more about leadership and strengthen the network of women working in wheat during the BGRI four-day “Leadership Training for Women Scientists,” held in Chennai, India, December 10-14, 2018.

“Leadership skills and team building are often overlooked in scientific training,” said Maricelis Acevedo, director of science for the BGRI’s Delivering Genetic Gain in Wheat (DGGW) project. “But scientists are often asked to lead, mentor and work successfully as a team. More and more, we collaborate on global teams and that is challenging on lots of levels.”

The course was intended to help scientists at any stage of their career achieve professional fulfilment. The group worked on facilitating group dynamics and managing conflict, dealing more effectively with different personalities and cultures, setting goals and priorities, delegating, and practicing key communication skills.

Training is a critical element of the DGGW’s ‘Talent Pipeline’ objective. “We want to help young scientists develop leadership and management skills, foster personal development, strengthen interpersonal competencies and improve their communication skills,” said Acevedo. “When we provide training opportunities for young scientists, we empower them to be better leaders, collaborators, and mentors.” 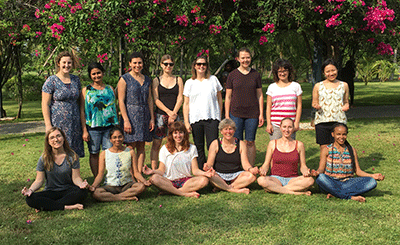 Sue Hewitt and Edeltraud Eller from the German-based consulting company HFP led the training. According to their website, HFP “supports leadership by considering the human aspects of science.”

Some trainees were previous BGRI Women in Triticum (WIT) Early Career Awardees. The 10-year-old WIT initiative — also an element of the Training Pipeline — will honor its 50th awardee in 2019.