The Journey Toward Gender Responsive Wheat Breeding in Kenya

The GREAT Gender-responsive Cereal Grains Breeding Course in Uganda surpassed my expectations. Week One was held in August 2018 and Week Two in January 2018. The experience transformed my thoughts about research and the driving force behind my efforts as a wheat breeder.

My institute, the Kenya Agricultural & Livestock Research Organization (KALRO), formerly known as the Kenya Agricultural Research Institute (KARI), was established in 1986 to conduct and promote research to improve agricultural productivity as well as equitable access to information and resources in agriculture. Working with my team members, Godwin Macharia and Anne Gichangi, my day-to-day activities as a KALRO scientist revolve around implementing biotechnology tools into the national wheat-breeding programme in Kenya.

Prior to the training course, I had no understanding of gender or what it meant, nor how it could benefit my work. It was a breath of fresh air to learn about the concept from trainers who at the time put it for us “laymen” so plainly that none could miss it. Male and female are biologically defined terms while gender is a function defined by culture and societal roles. Hence, gender differs within different community setups and geographical dispositions. 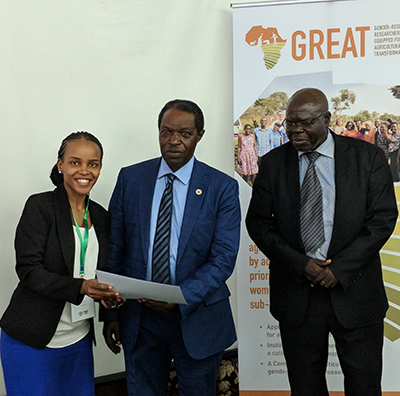 Bernice Waweru, left, received her certificate at the close of the GREAT Gender-Responsive Cereal Grains Course in January, 2018. Photo by GREAT.

Gender is particularly relevant to my work because the reason for all our breeding efforts is to improve the lives of farmers and the larger community by developing technologies that farmers will easily adopt and implement. For that to happen, a gender lens is required right from priority setting to selection of key traits, and from multi-locational trials to the release of technologies that positively impact communities for food security and improved livelihoods.

That “No man is an island” is a common African adage with the implication that nobody can achieve anything by working on their own. Multi-disciplinary research is key to achieving the GREAT vision of enabling researchers to undertake more inclusive research projects in order to create effective agricultural systems that address the priorities of men and women throughout Africa. Breeders like myself cannot achieve gender responsive research (GRR) on our own; we need agronomists, pathologists, socio-economists and gender experts, among a host of others. This, my team learned, needs to start right from the beginning during project conceptualization and design. Inclusivity needs to be embedded in each of the research objectives and goals.

To crown the end of the first week of the GREAT course, all teams received a $1,000 seed grant to implement the research questions and concepts developed during the training. This ensured that each team got to put into practice what we learned in addition to working as a multidisciplinary team to achieve gender responsive research objectives. 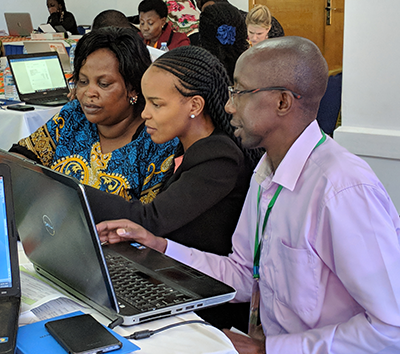 Anne Gichangi, Bernice Waweru, and Godwin Macharia work on a qualitative data analysis exercise at the 2nd week of the GREAT Cereal Breeding Course in Kampala, Uganda. Photo by GREAT.

In Week One, trainers emphasized the significance of using a mixed methods approach in data collection. A mixed methods approach uses both quantitative and qualitative data. We saw the need for it in Week Two while learning about subsequent effective data analysis and interpretation of GRR results for effective communication. In order to call people to action, relevant results have to be packaged to appeal to the relevant audience at the correct time and place. As a presenter, we also need to set the right ambiance for our message to sink in and invoke positive response.

My team and I were lucky to win the challenge of receiving the license to the software ATLAS.ti that is used for analysis of qualitative data. This software, which we had the chance to use in the second week of the course, is a gem.

They say when it rains it pours! Shortly after winning the challenge, one of us was offered the opportunity to be the moderator at the gender panel discussion at the 2018 Borlaug Global Rust Initiative (BGRI) Technical Conference taking place in April 2018 in Marrakech, Morocco. It happened to be me and I was exhilarated! I accepted the offer with open arms, this being a conference I have been longing to attend in my short career as a junior wheat scientist; it is the “crème de la crème” of conferences for wheat experts.

The chair of the BGRI is none other than Jeanie Borlaug Laube, the daughter of Norman E. Borlaug, the father of the Green Revolution. Norman Borlaug was not only a breeder and agronomist but also a teacher, mentor and humanitarian leader who saved millions of people through the wheat varieties he released and the work he did in calling policy makers and governments alike to affirmative action. I benefited from his legacy as a teacher and mentor when I was named a Borlaug LEAP fellow in 2014, which led me to attending the GREAT training, a key milestone for me in my young career.

My new-found adage is to apply a gender lens henceforth in my research to ensure that the technologies developed empower both men and women for improved livehoods. And it is an adage I look forward to applying as a moderator at the BGRI conference. I am proud to be a gender champion!

Bernice Ngina Waweru, from Kenya, is currently employed by KALRO, and is based at FCRC Njoro. Bernice has worked with KALRO since 2010 in various capacities, and is currently working as a molecular breeder under the current cereal breeder at the center, Dr. Godwin Macharia. She believes that by embracing technology and practicing sustainable agriculture, food security for all will be achieved in her country. She recently attained her MSc in Plant Breeding and Biotechnology from The University of Eldoret, Kenya.