DINAJPUR, BANGLADESH: Wheat blast, a devastating fungal disease that appeared in South Asia for the first time in 2016, was the focus of a surveillance workshop in Bangladesh where international experts trained 40 top wheat pathologists, breeders, and agronomists from Bangladesh, India and Nepal.

“Wheat blast is a particularly dangerous disease,” explained Maricelis Acevedo, associate director for science for the Delivering Genetic Gain in Wheat (DGGW) project at Cornell, who helped coordinate the workshop. “It is so effective at reducing yield because it can attack the plant at the spike where wheat grain will develop. At that point, it is difficult to treat, so the key is early detection in the field.” 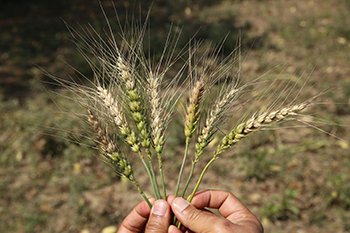 Wheat blast can affect various parts of wheat, but a characteristic symptom of blast is the shriveled grains on an otherwise healthy plant. These plants have all been infected with blast along different parts of the spike. Photo by Chris Knight, IP-CALS, Cornell

Wheat blast, induced by a fungal pathogen Magnaporthe oryzae pathotype Triticum, can rapidly destroy fields. In the most severe cases, farmers can lose up to 100 percent of their crop. Blast is particularly prevalent in areas of Brazil and warmer regions of the Southern Cone of South America, where farmers have been battling the fungus since the 1980s.

Participants spent five days of theoretical and practical training in classrooms, laboratories and greenhouses, and nine days in farmers’ fields, gaining a more thorough understanding of wheat blast and strategies to manage its spread.

Pawan Kumar Singh, head of wheat pathology at CIMMYT and one of the trainers, said it was one of the largest and most intensive workshops held for wheat blast. “This collaborative effort by BARI, CIMMYT, Cornell, and KSU was successful in providing the researchers from India, Nepal and Bangladesh an understanding of the science and practical constraints in designing and conducting a disease survey, obtaining and analyzing the results, and its interpretation,” said Singh.

Timothy Krupnik, systems agronomist at CIMMYT, who helped organize the training, noted that trainers focused on experiential learning and fieldwork to give trainees the maximum exposure to field and laboratory to hone their skills.

“Our objective was to make sure that younger generations of national wheat scientists have the skills to effectively plan and implement wheat blast monitoring programs in Bangladesh, India, and Nepal,” Krupnik said. “We expect and hope to continue to facilitate such collaborative training efforts in the future as they remain crucial for mitigating the food security threats posed by wheat blast in South Asia."

The training was timely and critical because farmers in multiple districts of Bangladesh experienced severe outbreaks of wheat blast in 2016. Reports indicate that wheat blast has again been observed in fields during the 2017 planting season. 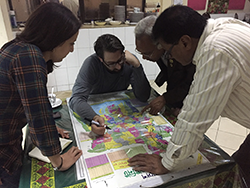 Maricelis Acevedo (DGGW), Tim Krupnik (CIMMYT), Paritosh Malaker (WRC-BARI), and DB Pandit (CIMMYT) examine a map of regions in Bangladesh to determine survey routes based on wheat growing regions and blast incidence in the 2016 and 2017 growing seasons. Wheat blast spores can remain dormant for a long time until the conditions become favorable for its spread. Photo by Chris Knight, IP-CALS, Cornell

“Wheat blast could be a serious threat to food security in South Asia if it spread,” said Acevedo. “An important aspect of securing the region against future losses is better surveillance and managing the spread of the infection.”

Training videos to be made available online

Videos and training information on wheat blast surveillance will be available on websites for the Borlaug Global Rust Initiative, CIMMYT and BARI within the next few months.

“That way we will be able to reach a much broader audience of scientists,” said Acevedo. “I was particularly excited that Christian Cruz, a pathologist from KSU — one of the world’s experts on wheat blast —was able to deliver his training modules at the meeting remotely through Skype. Sometimes we have to work around visa issues.”

First spotted in Brazil in 1985, wheat blast is difficult to manage because it is so poorly understood. As described in a report issued by CIMMYT, crop rotation is only partly effective as a control measure. Evaluating the resistance of individual wheat varieties is hard because the fungus is complex. 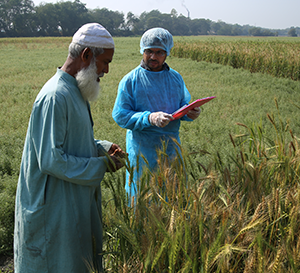 “The reappearance of blast in Bangladesh underlines the urgent need for a collaborative research platform to mitigate the threat in South Asia and regions with similar climates,” said Paritosh Malaker, chief scientific officer at WRC-BARI. “Breeding for disease resistance and the capacity development of young scientists would the first priority in this regard.”

“We are working together with national and international partners to mitigate the threat of wheat blast in Bangladesh and in South Asia. Surveillance and monitoring activity will be continued as a regular activity of the Wheat Research Council,” added NCD Barma, director of WRC-BARI.

The Bangladesh Ministry of Agriculture and Department of Agricultural Extension is actively working to mitigate wheat blast in the country. Last year, they formed a task force to provide recommendations to raise awareness among Bangladeshi farmers.