Inauguration of the Regional Cereal Rust Research Center in Turkey

In a trip to Turkey on May 29-30, 2018, Ronnie Coffman, vice-chair of the BGRI, and Maricelis Acevedo, associate director of science for the Delivering Genetic Gain in Wheat (DGGW) project, participated in the inauguration of the Regional Cereal Rust Research Center (RCRRC) in Izmir at the Aegean Agricultural Research Institute, and the International Winter Wheat Improvement Program (IWWIP) speed-breeding greenhouse. 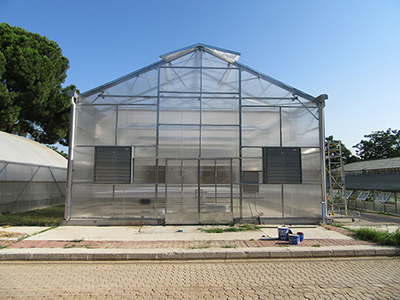 Building capacity: The new greenhouse in Menemen that is for wheat crossing and speed breeding was inaugurated on May 30, 2018, in Izmir, Turkey. Photo by Linda McCandless.

“Staying ahead of rust is the goal of the DGGW with this investment in the Regional Cereal Rust Research Center in Izmir,” said Coffman, during inaugural remarks. “For the last decade, the BGRI has had an unwavering partnership with Turkey and ICARDA as well as the fine wheat scientists in Turkey. At the end of the day, we succeed when we are able to improve the food security and livelihoods of smallholder farmers who need improved varieties of all kinds of crops — including wheat. Our challenge is to improve crops so they are able to resist the biotic and abiotic stresses that are increasing in frequency and intensity.”

The new greenhouse, or glasshouse, is for “crossing and speed breeding,” according to Alexey Morgunov, with CIMMYT-Turkey, who is winter wheat breeder and head of the IWWIP. The IWWIP team will be able to be able to advance one or two additional generations of winter wheat (200-250 entries annually) and spring wheat (100-120 entries annually) per year by using the greenhouse.

“This facility will allow for greater genetic gain by increasing the number of generations per year and reducing the time it takes to incorporate new traits into elite germplasm,” said Morgunov. He noted that the capacity is for 25,000 plants per cycle and that they initially plan two cycles, perhaps October to March and April to September. “Depending how it will progress, we may increase it to 2.5 or 3 cycles. We will know for sure in a year,” he said.

The facility has come alive with the generous and continuous support of Turkey and ICARDA and the DGGW. Funds were also made available for a growth chamber, supplies for the Biosecurity Level 3 facility — or BSL-3 — as well as general greenhouse and lab supplies for the Regional Cereal Rust Research Center. The activities at this secure state-of-the-art facility will consist of regional rust pathogens surveillance and race analysis of cereal rust samples. The BSL-3 provides a precise phenotyping platform for wheat rust pathogens race typing and rust resistance screening for the Central and West Asia and North Africa (CWANA) region, regional training on wheat rusts and backstopping of the national rust laboratories in CWANA, and collaboration with East Africa platforms under CRP Wheat and advanced cereal rust laboratories in Denmark, France, USA and Canada. 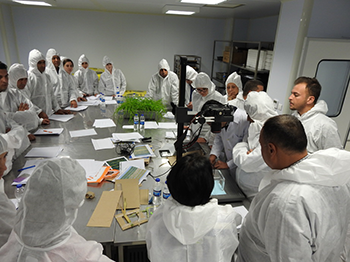 “This new facility will help wheat production in Turkey as well as neighboring countries because the lab will be able to receive samples from the whole CWANA region,” said Coffman. “The Center will help strengthen our global surveillance network by providing timely information about the rust pathogen populations and movement affecting wheat production in the region.”

Coffman acknowledged the support of the Bill & Melinda Gates Foundation and UK aid through the British Government through International Development of the UK, or DFID.

Other participants at the inauguration included H. Gazi Kaya, Director General (DG) of the General Directorate of Agricultural Research and Policies in the Republic of Turkey Ministry of Food, Agriculture and Livestock; Aly Abousabaa, DG of ICARDA; David Hodson from CIMMYT; and Michael Baum, Director of Biodiversity and Crop Improvement with ICARDA.

15 July 2018: We just visited the IWWIP Speed Breeding facility and the plants have been growing very well and speedy. Please see the attached photo. So far the time needed between planting in the greenhouse and anthesis was 50 days and may be another 30-40 days for maturity. Very little sterility despite the outside temperature of 35-38oC. Few winter populations are behind in development probably due to longer vernalization needs. This germplasm will be planted in the field in October. We will start a new cycle in early August with vernalization and green house transplant in September. 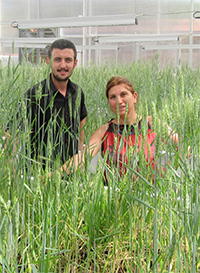