Since 2009, the International Center for Agricultural Research in the Dry Areas (ICARDA) and the Ethiopian Institute of Agricultural Research (EIAR) have partnered for the identification and development of new durum wheat varieties capable of withstanding the harsh environmental conditions of Ethiopia. The field research Center of Debre Zeit, located some 40 Km outside Addis Ababa, is at the forefront of identification of suitable varieties of Durum wheat. Each year, this Center screens thousands of potential varieties for their response to the relentless stem rust pathogen. 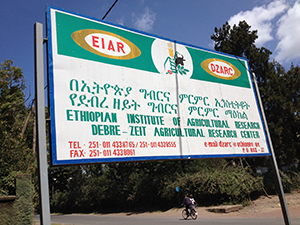 Among the first set of elite durum wheat breeding lines that arrived in 2009, three entries appeared to be the most promising. Two of them were released in 2012 under the names Mangudo (MRF1/STJ2/3/1718/BT24//KARIM) and Mukiye (STJ3//BCR/LKS4/3/TER3), and the third was released in 2015. The first was identified as most suitable for high-rainfall areas, such as the highlands of Bale, while the second showed high performances under drier conditions, which was ideal for low altitude areas. Farmers immediately appreciated these new varieties as they provided substantially higher yields than the previous ones. However, as the stem rust pathogen changed, Mukiye slowly became more and more susceptible, until it finally crashed in 2016 and it was removed from the multiplication efforts.

Pre-multiplication of Mangudo at the Debre Zeit Center in October 2015.

Mangudo has remained within acceptable levels of susceptibility to stem rust since its first identification. Under very heavy artificial infections, rust severity ranged between 20% and 30%  with moderately susceptible (MS) reaction. In 2015, a sister line of Mangudo was identified and released under the name of Utuba. This new wonder provided nearly double the yields of Ude, the most widely grown variety, and quickly got acceptance by farmers. One farmer in Minjar (Pic 3) explained that the difference in yield between the two was like comparing how many seeds he could hold in his left hand (Ude) and how many he could hold in both hands (Utuba). After some discussion and translation, the total gain was quantified in 2.5 tons of extra yield per hectare, equal to a profit gain of nearly $1000 USD per hectare.

Based on these preliminary on farm results, Utuba was tested in six intervention kebeles (wards/neighborhoods): two each in  Amhara, Oromia and Southern regions  as part of the project Africa RISING (AR) led by the International Livestock Research Institute  (ILRI) in partnership with ICARDA and NARS. The outcome at the two farms where full data were recorded was a staggering 1 ton per hectare advantage over the most recent bread wheat cultivars released. Across sites, the average yield was measured at 4.7 tons per ha, while the average of Ude was 3 t ha-1, and that of Mangudo 3.8 t ha-1. After Utuba was showcased during farmers’ field days, in AR sites in Bale highlands, more than 11.5 tons of seeds of Utuba was purchased by farmers for further seed production for larger impacts.

After testing for industrial processing, the Alvima PLC pasta factory purchased 30.5 tons of Utuba from Minjar farmers and distributed these to other farmers under request by the Agricultural District Bureau. The agreed price was 1300 Birr (~$56 USD) per ton, while the normal market price for durum grain is 750-850 Birr (~$32-26 USD). More importantly, the company agreed to pay the premium price of 1,100 Birr (~$47 USD) per ton for Utuba with confirmed protein content above 14%, a level this variety typically reaches. Yet, this price is lower than what paid the year before by the Sinana center, that was obliged to pay 1,450 Birr (~62 USD) per ton to start production of seeds of this variety. 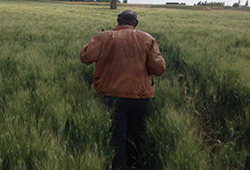 A beautiful field of Utuba

Utuba’s has several preferred advantages that make it attractive to farmers. The first is its great tillering capacity. On one hand, this provides more spikes and therefore more yield, the trait most appreciated by farmers. However, the extra stems also provide more straw to be used for feeding livestock, another critical trait for smallholder farmers. Another advantage is early heading, which allows it to avoid the negative effect of the terminal drought and desiccating wind that occur with higher frequency toward the end of the season. Farmers near Bale saw their neighbors’ bread fields completely wiped by stems rust, but with Utuba, even the worst rust infections only affected 5% of the stem. This high level of resistance to rust was one of the most visually compelling decision points for farmers to adopt the variety. Finally, the quality lab of ICARDA analyzed the rheological performances of Utuba to confirm what Alvima PLC already discovered: protein content in this variety tends to be high, the gluten is strong, and the color of the semolina is an excellent amber yellow.

In 2017, two new varieties were released by the Debre Zeit Research Center under the names of Alemtena and Tesfaye. The latter is a direct release from CIMMYT germplasm and it is aimed at complementing Utuba for the production under high moisture conditions. The former is a release from ICARDA  breeding lines identified from a nursery sent in 2013 under the name of Zagharin2 (Icasyr1/3/Gcn//Sti/Mrb3). It shares limited pedigree with Utuba, and it can therefore be consider as a likely new source of stem rust resistance. More importantly, this variety offers ideal rheological performances, combined with good agronomic levels and strong resistance to all three rusts. It is therefore with good hope that we shall promote these two latest additions to Ethiopian farmers to facilitate their adoption. 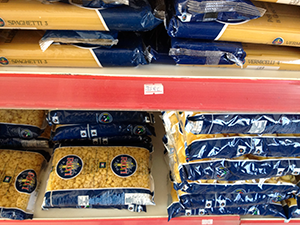 The continuous support to the research activities carried on by the Debre Zeit Research Center and the other centers located throughout Ethiopia is quintessential to continue delivering smallholder farmers out of the poverty trap. With the achieved extra $1000 USD per hectare profit now farmers can send their children to school and keep their livestock healthy throughout the year. Further, the pasta industry can now prosper using cheaper and better national grains, instead of relying on the expensive mechanism of importation. Still, this mechanism is not yet self-supporting and there is a need for foreign aid to continue basic research operations to develop, identify, and promote varieties capable of adapting to the changing climates.

This research was undertaken with support from Africa RISING, a program financed by the United States Agency for International Development (USAID) as part of the United States Government’s Feed the Future Initiative. The content is solely the responsibility of the author/s and does not necessarily represent the official views of USAID or the U.S. Government or that of the Africa RISING program. Africa RISING is aligned with research programs of the CGIAR.