“I have been farming for the last 50 years. I have seen production dwindling slowly and steadily, erratic climatic conditions, bad seeds and lack of finance as key issues which have led to the fall of prosperity for farmers,” said Haribhakta Dhakal from the Chitwan region of Nepal, one of 200 farmers who gathered for the inauguration of the Seed Systems for Nepal initiative, on January 23, 2017. 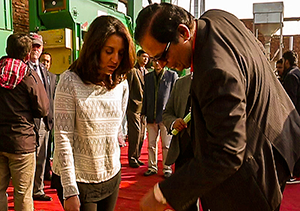 Maricelis Acevedo (DGGW) and Kannan Vijayaraghan (Sathguru) inspect bags of wheat at the new seed processing unit, which can process one ton per hour and run 18 hours a day.

“We are working closely with farmers in Nepal and partnering with the Agriculture and Forestry University, or AFU, on quality seed production, processing and distribution,” said Maricelis Acevedo, associate director of science for the Delivering Genetic Gain in Wheat (DGGW) project at Cornell, who is helping spearhead the initiative. “The 200 farmers will form the basis of the new seed ‘village’ that is being developed to help produce quality seed in Nepal. This is a unique seed initiative within the DGGW where we are really working directly with farmers.”

Acevedo was one of three Cornell faculty who attended the inauguration, along with Ronnie Coffman, director of International Programs, and KV Raman, plant breeder and geneticist.

“Seed processing and seed testing are absolutely critical when it comes to delivering genetic gains to farmers,” said Coffman, speaking at the event. “The goal of the DGGW is to develop wheat that meets multiple challenges that face wheat farmers in Africa and South Asia— wheat that is high-yielding, disease-resistant, and heat and drought tolerant.”

Chitwan is one of the most fertile regions in Nepal. Farmers there — most of whom are smallholder, peasant farmers who grow wheat, rice and maize in rotation — are responsible for much of Nepal’s wheat production.

“Seed Systems for Nepal is expected to play a major role in inclusive growth. It will involve women empowerment, whole family participation in varietal selection, and entrepreneurship for sustainable livelihood and overall development,” said Kannan Vijayaraghavan, chairman of Sathguru Management Consultants, a key partner in the project. 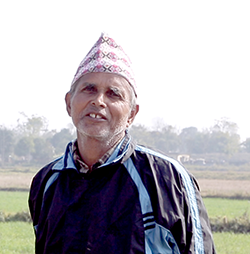 Haribhaktha Dhakal was one of 200 farmers who attended the inauguration of the seed processing unit.

On January 23, farmers, DGGW representatives and top dignitaries from the Planning Commission and the Agricultural Ministry of Nepal attended the inauguration and the unveiling of the new seed processing machinery at AFU. The equipment has the capacity to process one ton/hour, is appropriate for small-batch processing, and can be used for wheat, rice and maize. It includes a seed dryer, pre-cleaner, cleaner, gravity separator, also seed treatment, weigher and packaging units, as well as equipment that tests seed for purity, germination and moisture.

Local farmers and seed companies will have access to the unit and the services it will provide. 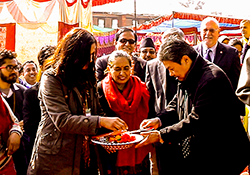 In the wheat season just underway in Nepal, AFU has sown Foundation and Certified wheat seeds on 15 hectares of land. Appropriate rust resistant wheat varieties that are popular and suitable for growing in the region have been identified in consultation with appropriate stakeholders from AFU and the research wing of the Nepal Agricultural Research Council (NARC).

“AFU will provide training to farmers to help them adopt the best practices to produce quality seed,” said Acevedo.“In three years, we expect to see higher yields, better variety adoption and better income for farmers and their families.”

Speaking at the event, Iswari Prasad Dhakal, the vice-chancellor of AFU, said, “It is important for us to look at improving the productivity of Nepal. Today we have a skewed and a negative relation between the population growth and the productivity we need to help sustain the population.” He hopes that the Seed Systems Initiative will kick-start greater gains for farmers in terms of productivity, skills, knowledge and quality of life.

Seed Systems for Nepal is being implemented by the DGGW and Sathguru Management Consultants, India, in cooperation with the AFU and the NARC. The DGGW project is headquartered at Cornell University and is funded by the UK Department for International Development under their UK Aid program, and the Bill & Melinda Gates Foundation.