Developing heat and drought tolerant wheat for Asia and Africa

Wheat is the most important and strategic crop at global level, and in Central and West Asia and North Africa (CWANA) region in particular. It is estimated that the CWANA region produces more than 100 million tons of wheat on a total area of more than 50 million hectares. The current productivity of wheat in the region is very low (2.5 t/ha), which is less than the world’s average (3 t/ha). 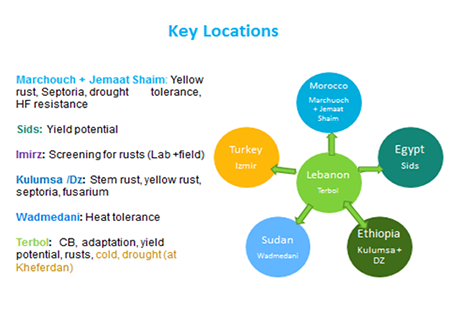 With the current rate of climate change, it is anticipated that wheat production will set back in the region due to high temperature and drought, emergence of new pests and diseases as already exemplified in the recent epidemics of stripe rust across the CWANA region and Ug99 epidemic in East African countries.

The wheat breeding program at ICARDA applies both conventional and molecular breeding approaches and techniques in order to develop high yielding and widely adapted germplasm with resistance/tolerance to heat and drought stresses. Shuttling of the segregating generation between Terbol Station in Lebanon, Sids Station in Egypt, Kulumsa Station in Ethiopia and Merchouch Station in Morocco followed by key location yield testing enables to combine yield potential and wide adaptation with resistance to biotic and abiotic stresses.

The effect of climate change is also evident on the quality of wheat: increased heat causes early aging, resulting in shriveled wheat grains and protein degradation.  To combat the effect of climate change and develop climate smart wheat technologies, the International Center for Agricultural Research in the Dry Areas (ICARDA) is conducting several projects in collaboration with international, regional and national partners.

This approach has successfully identified climate resilient wheat varieties combining high yield potential, rust resistance, and heat and drought tolerance. In field trials, some of these genotypes yielded 6t/ha at Wadmedani Station of Sudan under extreme heat stress, 7 t/ha at Merchouch Station of Morocco under rain-fed conditions, and 11 t/ha at Sids Station (Egypt). 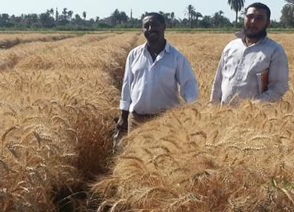 On an annual basis, the spring bread wheat program composes and distributes 400 elite sets of these genotypes through international nurseries and yield trials to countries in the CWANA and Sub-Saharan Africa (SSA) regions and beyond upon request for potential direct release/or parentage purposes. In the last 5 years, national programs in the CWANA and SSA regions have released more than 30 spring bread wheat varieties of ICARDA origin.

In addition to germplasm development and distribution, it is important to build national capacity both in terms of manpower, facilities and resources so that varieties can be released, multiplied and adopted to bring the intended impacts of increasing wheat production and ensuring food security. To this end, ICARDA has established an annual wheat improvement course in which on average more than 20 junior and mid-career NARS scientists experience a comprehensive hands-on course on breeding for durable disease resistance, high yield potential and stability, drought and heat tolerance, end-use seed quality, and seed health issues using conventional and molecular tools.