The funds for the four-year Delivering Genetic Gain in Wheat, or DGGW, project will build on a $24M grant from the Bill & Melinda Gates Foundation, announced in March 2016, and bring the total to $34.5M.

“Wheat provides 20 percent of the calories and protein consumed by people globally, but borders in Africa, South Asia and the Middle East are porous when it comes to disease pathogens and environmental stressors like heat and drought that threaten the world’s wheat supply,” said Ronnie Coffman, international plant breeder and director of International Programs at Cornell University, who leads the global consortium. 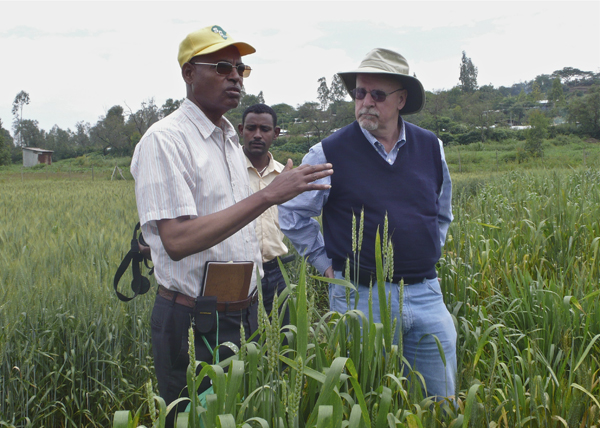 “We are using the modern tools of comparative genomics and big data to develop new varieties of wheat for smallholder farmers that incorporate resilience to abiotic stresses and diseases such as rust and septoria,” he said.

The UK aid investment builds on the successes of the Borlaug Global Rust Initiative (BGRI) and the Durable Rust Resistance in Wheat (DRRW) project, funded jointly by the British people and the Gates Foundation from 2008 to 2016.

“Over the last nine years, we have built a global community of wheat scientists whose efforts have so far prevented the global epidemics of Ug99 stem rust anticipated by Dr. Norman Borlaug back in 2005,” said Coffman. “Working with national and international partners, we have delivered more than 65 varieties of wheat with improved resistance to rust and increased wheat yields globally.”

For many of the poorest people in Africa and southern Asia, wheat provides most of their food and is an important source of income.

“It’s these people who have benefitted the most from the DRRW and the BGRI’s successes developing new strains of wheat that are high yielding, rust resistant and nutritious,” said Coffman. “Smallholder farmers will benefit further under the DGGW.”

More than 2,500 scientists from 35 international institutions spread across 23 countries are involved in the consortium. Agricultural scientists from 37 countries contribute data to a unique surveillance network coordinated by Dave Hodson, senior scientist with the International Maize and Wheat Improvement Center (CIMMYT), based in Ethiopia, who directs the rusttracker.org global wheat rust monitoring system.

“Deadly wheat pathogens have been moving from the wheat fields of East Africa into the Middle East. Thirteen countries are now infected with 13 variants of the highly virulent Ug99 stem rust,” said Hodson. “Other dangerous stem and yellow rust race groups are also emerging. We need effective and responsive surveillance and early warning systems in place because it's not just Ug99 that we have to worry about. New threats are coming up. We're seeing a dramatic expansion in geographical range and new variants emerging within key race groups. Ug99 was a wakeup call, and we’ve benefitted from the investments that have been made in rust surveillance. But there's no room for complacency because new threats are emerging. We need to be flexible and address any new concerns that arise."

In its push to identify genes that can resist evolving and virulent diseases and environmental stresses under the new four-year grant, the DGGW will also focus on capacity building and training the next generation of hunger fighters. 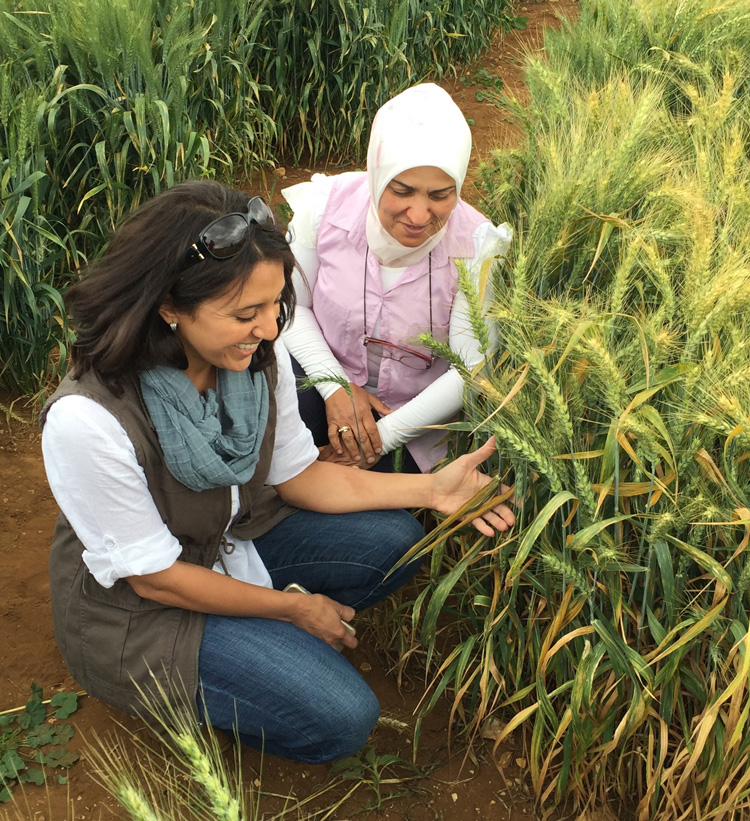 Maricelis Acevedo, Cornell plant pathologist and associate director for science for the DGGW project and Cornell, checks for yellow rust in the Beqaa Valley with a colleague from ICARDA. CREDIT: Provided

“Collaborative agreements with national governments and agencies are in place to improve the in-country capacity to screen thousands of wheat samples from every continent to identify disease- and heat-resistant lines,” said Maricelis Acevedo, wheat rust pathologist and senior research associate at Cornell who is the associate director for science for the DGGW project. “And resources are being invested to strengthen the pipeline to train young scientists in at-risk countries, both men and women.”

The FAO estimates world demand for wheat is expected to increase up to 60 percent by 2050, as the global population reaches or exceeds 9 billion people. “Globally, we need to produce more wheat with limited natural resources and in more sustainable ways,” said Acevedo. “Breeding, surveillance, capacity building, training and advocacy are critical.”

The DGGW project is based at Cornell University, and enlists national partners in Kenya and Ethiopia as well as scientists at international agricultural research centers that focus on wheat, including the International Maize and Wheat Improvement Center (CIMMYT) and the International Center for Agricultural Research in the Dry Areas (ICARDA). Advanced research laboratories in the U.S., Canada, India, Turkey, Denmark, and South Africa collaborate on the project.