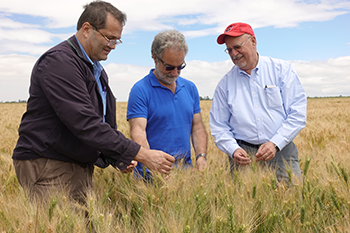 “I wish we had more countries where the response to threats was as impressive as what has been achieved over the last 10 years in Ethiopia,” said Hans Braun, director of the wheat CRP for CIMMYT. “What is increasingly encouraging is the system that has been put in place for seed multiplication, and the number of famers who receive — and are planting — improved varieties.”

According to Zerihun Tadesse, wheat breeder for EIAR at the Kulumsa Research Center, Ethiopia is the largest wheat producer in sub-Saharan Africa. Over 4 million metric tons of wheat was produced in 2014-15, over four agro-ecologies. The average yield in 2015 was 2.54 tons/hectare. Tadesse noted that there is still lots of room to increase production, as Ethiopia imports 25 percent of its bread wheat, and demand continues to rise.

Over the past 10 years, one of the biggest changes is that farmers are beginning to shift from intensive hand labor of planting, weeding and harvesting, to more technologically robust methods of farming. With the encouragement of EIAR, CIMMYT and USAID, farmers are also beginning to adopt a more “cluster” approach to seed multiplication, machine ownership and use of planters, harvesters, and threshers.

Farmers have begun to change from manual planting to plot drilling, and manual harvesting to plot combining. These changes were particularly noticeable at the various EIAR research centers, where technological innovations have been accelerated by capacity building efforts pioneered by the DGGW, CIMMYT and EIAR.

Farmers’ use of fertilizer use has also gone up, as has the agronomic practice of planting in rows. These changes were readily observed in farmers’ fields, as was the use of fungicides on a more targeted basis. Because of the development and increasing sophistication of rust pathogen surveillance pioneered by Dave Hodson, and early warning alerts from the government, farmers are being advised when it is necessary to spray susceptible wheat varieties — alerts that reduce yield losses.

All agreed that the most promising changes over the past 10 years has been the adoption of resistant varieties, the systematic increased rate of genetic gain, and increased resistance to diseases like stem rust, yellow rust and septoria. 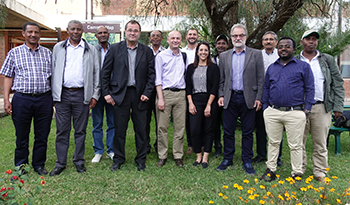 Over the course of five days, we visited four research stations, two substations and numerous farmers’ fields. Travel time has substantially improved due to the highway system that has been built by the Chinese over the last five years — a change that positively affects researchers, farmers and market accessibility.

On October 30, we visited the Debre Zeit Research Center to evaluate wheat germplasm and farmers’ durum fields. Popular durum varieties are Ude, Utuba and Mangudo. Donmatteo is in pre-release seed multiplication and will be a candidate variety for low moisture areas.

On October 31, on the way to Kulumsa, we visited bread wheat farmers’ fields and saw our first combine in operation in farmers’ fields. Farmers seem to like Kingbird because it yields nearly as well as Kubsa and, additionally, is highly resistant to rust. Kingbird’s resistance to various rusts is significant becaues of the breakdown and susceptibility of some of the earlier releases of stem-rust-resistant wheat like Danda’a and Digelu which had only minor gene resistance to yellow rust.

Kingbird was initially released in Kenya in 2015. It was CIMMYT’s suggestion to bring Kingbird to Ethiopia from Kenya — a move pioneered by Peter Njau at Njoro. Another recent bread wheat variety release, Wane, is also proving to be very high performing and is being extensively planted.

In the afternoon of October 31, we visited the Kulumsa Research Center to evaluate germplasm nurseries and breeding trials, while also touring infrastructure improvements related to the greenhouse, plot planters, combines, and the irrigation system.

On November 1, we traveled to the high-altitude Kulumsa substations of Bekoji and Meraro to observe how wheat germplasm was performing and see the severity of infection of yellow rust, stem rust and septoria.  These stations are excellent for selection of yellow rust and septoria resistant germplasm, as environmental conditions are highly conducive to selecting for disease resistance because disease pressure is high.

On November 2, with an eye to security on the highway, we were able to visit the Holetta Research Center to see the new septoria platform being developed under DGGW funding, and to further evaluate wheat germplasm under trial there. Over 1000 lines are being screened for septoria in Holetta. 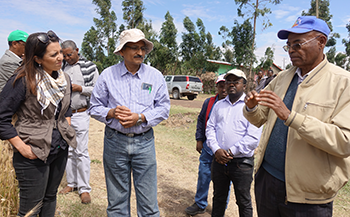 Stopping at a farmer's field near Kulumsa, Bedada Girma (r) talks about the successful multiplication and distribution of Kingbird in farmers' fields, with funding from USAID.

Four days of field visits wrapped up on November 3 with a day-long meeting with all participants at the ILRI-CIMMYT campus. Representatives from each institution and various breeding programs made presentations that was followed by animated discussion on collaborative approaches to address NARS and regional problems.

Up for consideration is whether Ethiopia should grow more durum, the hardship involved with taking Ethiopian germplasm (particularly durum landraces) out of Ethiopia for trials, and the potential to build out the “cluster” model of seed multiplication and distribution.

Both Ravi Singh and Ronnie Coffman suggested that collaborators streamline operations for their Ethiopian partners by focusing on trials for the lines with most potential. Simultaneously, the group agreed about the importance of phenotyping for traits like drought tolerance while also testing for grain yield, including susceptibility to leaf rust, yellow rust, stem rust, septoria, fusarusm, karnal bunt, tan spot and others. “And not to neglect the quality of the bread,” said Singh.

One of the most promising technologies coming out of Dave Hodson’s pathogen and host surveillance activities is the potential for DNA fingerprinting of wheat varieties. “This will reduce the discrepancy between what famers think they are planting and what is actually out in the field,” said Hodson.