The emergence of the Ug99 race of stem rust in Africa and the Middle East together with the appearance of new strains in Europe catalyzed a major effort to identify new sources of stem rust resistance and breed these genes into wheat lines. However, the continued emergence of stem rust variants that overcome new resistance genes, now demands an increased focus on pathogen evolution and virulence mechanisms.

Numerous stem rust resistance (Sr) genes are known and in recent years several of these have been cloned and used to develop so-called ‘perfect’ markers to allow more rapid and accurate breeding. These genes typically encode immune receptors that recognize specific protein components of the fungal pathogen to trigger resistance. However, the molecules recognized by these Sr genes have been unknown until now, hampering our understanding of how new strains of P. graminis f. sp. tritici evolve to escape plant recognition. 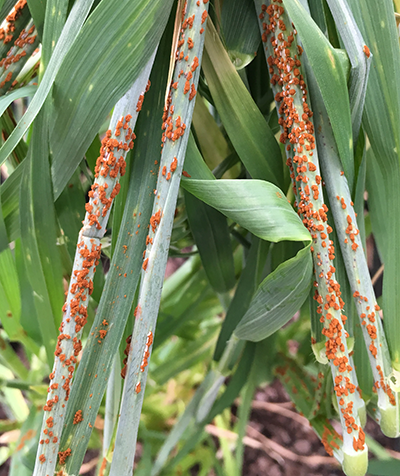 New insight into this evolution came from the identification of the protein, AvrSr50, which is recognized by the wheat Sr50 resistance gene, by  an international collaboration led by Dr. Peter Dodds (CSIRO Food and Agriculture and University of Minnesota Adjunct Professor) and Professor Robert Park (University of Sydney and Director of the Australian Cereal Rust Control Program) and involving teams in the UK and the US.

The story of this breakthrough began with the serendipitous discovery of a natural mutant of P. graminis f. sp. tritici which can grow in spite of the presence of the Sr50 resistance gene in wheat. This mutant was recovered at the University of Sydney while scoring resistant wheat lines as part of a previous effort resulting in cloning of Sr50 (Mago et al 2015, Nature Plants article 15186). Ph.D. Graduate student Jiapeng Chen (University of Sydney) sequenced the genome of this mutant and its progenitor, and together with Dr. Narayana Upadhyaya at CSIRO identified a large genomic region that was missing in the mutant and was ultimately was shown to contain AvrSr50. However, the researchers were faced with a daunting task, as there were over 900 genes encoded in the missing region, any of which could be responsible for recognition. This long list was narrowed down to about 40 candidates by focusing on those encoding secreted proteins that were most likely to exposed to wheat receptors during infection. Then Dr. Diana Ortiz (CSIRO) used a screen in transgenic tobacco plants to show that just one of these candidates was recognized by Sr50. However, final confirmation came from a virus-based assay developed by Dr. Kostya Kanyuka at Rothamsted Research in the UK. Dr Kanyuka’s group was able to show that wheat lines with Sr50 were resistant to an engineered virus containing AvrSr50.

The genetics of P. graminis f. sp. tritici are similar to humans, the fungus typically carries two copies of each gene and proteins encoded by these genes can differ slightly within one strain or among strains. These variations are the result of evolution and can allow the fungus to avoid plant recognition. The laboratories of Professor Brian Steffenson at the University of Minnesota and Dr. Yue Jin from the USDA-ARS Cereal Laboratory (and Adjunct Professor of the University of Minnesota) have maintained diverse collections of P. graminis f. sp. tritici for many years. Such collection served as powerful resource for the laboratory of Assistant Professor Melania Figueroa at the University of Minnesota where Ph.D. graduate student Feng Li conducted experiments to examine the variation of the AvrSr50 gene in a representative set of wheat stem rust strains. The study included the analysis of Ug99 and a naturally-isolated Sr50 virulent strain which was previously recovered from the alternate host of P. graminis f. sp. tritici, barberry. Learning which variants of AvrSr50 exist in a particular geographic region is instrumental to determine the probability that P. graminis f. sp. tritici can disguise itself and trick the plant immune system.

The identification of AvrSr50 is a significant scientific breakthrough in cereal rust research and was published in Science on December 21, 2017 back to back with work from another team reporting the identification of AvrSr35 (Salcedo et al, 2017), another molecule recognized by wheat via the receptor Sr35. These findings are of great value as detailed knowledge of the Avr gene variants in rust populations can allow us to anticipate virulence evolution and support decisions about which resistance genes to prioritize in breeding efforts.  These Avr genes can also be used to confirm the function of individual Sr genes in wheat lines containing multi-resistance gene cassettes, a major goal of a 2Blades funded research program to develop durable stem rust resistance solutions. This work also positions the research community to isolate additional virulence molecules from P. graminis f. sp. tritici as well as other important cereal rust pathogens.

This productive collaboration among various laboratories across the globe exemplifies the importance of fostering science across borders and recognizing and harnessing different strengths within our scientific community.

Work towards AvrSr50 identification was supported by the 2Blades foundation, the Grains Research and Development Corporation (grants US00067), University of Minnesota Lieberman-Okinow and Stakman Endowments, Experimental Station USDA-National Institute of Food and Agriculture Hatch Funds (project MIN-22-058), and the Biotechnology and Biological Sciences Research Council (project BB/P016855/1). The authors state their continued commitment to working together in characterizing the biology of rust pathogens.

Loss of AvrSr50 by somatic exchange in stem rust leads to virulence for Sr50 resistance in wheat, Chen et al. 2017