In 2018, the BGRI will be publishing a series of Q&A’s with scientists in the DGGW project. In honor of the UN Women in Science Day on February 11, this month we profile Shitaye Homma Megerssa, a Ph.D. Candidate from Ethiopia who is working in Mark Sorrells' laboratory at Cornell University. Her work is being supported by the DGGW under the Talent Pipeline objective.

Tell us a bit about the current research you've undertaken in the labs here at Cornell.
Up until now I was taking courses, working on my project plan and communicating with collaborators at different places (Minnesota, CIMMYT, Kenya and Ethiopia) to start the project. My plan was to start seedling evaluation at the Cereal Disease Lab (CDL) in Minnesota during my January 2018 break. However, the seed samples didn’t arrive from CIMMYT probably because they had not been harvested by the time that I sent the request.

Who have you worked with during your time at Cornell so far?
I worked to plan our project, communicate with collaborators and arrangements for seed sample shipping, and budget for this project with my main supervisor, Professor Mark E. Sorrells. Also, I worked with Maricelis Acevedo to arrange my travel to Cornell, course materials, work out the project budget, and facilitate my work in Ethiopia and Minnesota in the future. 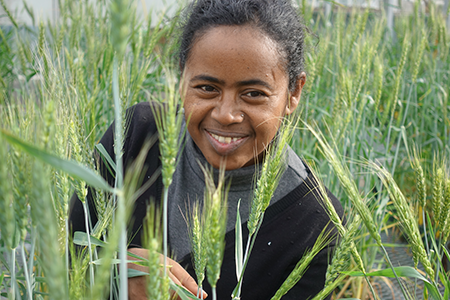 What were you working on before coming to Cornell?
When I began my career, I served as a technical assistant at the Debre Zeit Agricultural Research Center, EIAR, Ethiopia. Later I served as a junior researcher to the associate researcher position. I worked on the chickpea and lentil improvement program during my junior researcher to assistant researcher position and shifted to the Durum wheat improvement program in 2013. During my time with the Durum wheat-breeding program, I was involved with conventional breeding for different agronomically and economically important traits. Improving yield, quality and rust resistance were the main focus.

What do you hope to see the project yield as far as research?
The battle against rust disease is a continuous process as far as wheat production is concerned. I hope that our project will generate important information and uncover new sources of stem and leaf rust resistance and deploy them in our breeding program and eventually integrate them globally. As of yet, Marker Assisted Breeding (MAB) was not practical in the Ethiopian Durum/wheat improvement program due to the lack of some facilities and a limited capacity of skilled personnel. Hence, I’m very enthusiastic to begin work on MAB through this project for the traits I mentioned earlier along with the support from my supervisors and other collaborators.

What challenges have you experienced so far in your research?
One challenge I’ve experienced so far was communicating with collaborators in different countries and a bit of delay in getting germplasm to start the research work as planned. Moreover, I am bit concerned regarding the reliability of irrigation to start off-season work in Ethiopia due to country-wide issues with water as well as related facilities (e.g. electricity) as mentioned to me by colleagues. However, undertaking seedling evaluation in the nurseries during the main season would be another alternative if the water problem persists.

What's next for your project in Ethiopia and Minnesota?
My plan for Ethiopia is to start field phenotyping for stem rust in the main season. Regarding Minnesota, the plan for seedling evaluation was postponed from January to mid-February of this year. However, I am still waiting to hear about the arrival of the germplasm to schedule the time to do it before starting the main season work in Ethiopia.