The Borlaug Global Rust Initiative (BGRI) and the Delivering Genetic Gain in Wheat (DGGW) project are excited to announce the 2020 cohort of Jeanie Borlaug Laube Women in Triticum (WIT) awardees.

“The future of wheat science depends on innovative, enthusiastic researchers,” said Maricelis Acevedo, director for science of the DGGW. “We are thrilled to honor these incredible scientists with a WIT award and continue the tradition of recognizing the next generation of top-notch scientists and the people who mentor them.”

The five women wheat scientists who have received the 2020 WIT Early Career Award and the individual receiving the 2020 WIT Mentor Award will be celebrated at a BGRI online event, “The Changing Face of Leadership and Research in Wheat,” on May 21, from 10-11 am.

With this cohort, the BGRI has recognized 55 early career award winners since 2010. “Building capacity within the scientific community by encouraging and supporting the training of young women scientists has always been one of the BGRI’s key goals,” said Acevedo. “Over the last decade, these scientists have emerged as leaders across the wheat community. We sincerely thank all the mentors who have supported these women’s efforts.”

The WIT Early Career Award provides early career women working in wheat with the opportunity for additional training, mentorship, and leadership opportunities. The WIT Mentor Award, first awarded in 2011, recognizes the efforts of men and women who have played a significant role in shaping the careers of women working in wheat and demonstrated a commitment to increasing gender parity in agriculture. 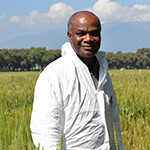 The 2020 WIT Mentor awardee is Evans Lagudah, a Chief Research Scientist at CSIRO, Australia, a Fellow of the Australian Academy of Science and an adjunct professor at the University of Sydney. Lagudah’s research interests cover basic studies on the molecular basis of multi-pathogen resistance genes, cloning of cereal immune receptors and genomic analyses/manipulation of targeted disease resistance traits. Among his research highlights are defining the molecular basis of adult plant rust resistance genes which represent novel classes of plant defense genes that function broadly in cereal crops against multiple pathogens. Lagudah operates at the interface between agriculture and fundamental molecular research, and his research ensures the rapid translation of new molecular discoveries into practical agriculture in the global grains industry. Lagudah continues to train and mentor PhD students, postdoctoral researchers and early- and mid-career scientists. He is a regular contributor to the West African Centre for Crop Improvement which trains the next generation of plant breeders in sub-Saharan Africa. He is among the world’s top 1% of most influential scientists as ranked by “Clarivate Analytics Highly Cited Researchers List” which identifies scientists who have demonstrated significant influence during the last decade.

The DGGW is an international initiative to improve wheat that is funded by the Bill & Melinda Gates Foundation and UK aid from the UK government.