In another first for the BGRI Technical Workshop, the sessions moved beyond rust to think in a broader sense about the BGRI’s mandate to deliver genetic gains in wheat, and how we need to consider physiology and abiotic stresses in order to do this.

Several presenters highlighted the importance of root architecture and asked whether we can modify wheat root systems to capture more water post-anthesis, especially under drought conditions. For example, Roberto Tuberosa’s work at the University of Bologna takes the dual-pronged approach of linkage mapping and association mapping to look at root system architecture, drought-related proxies, and grain yield and yield stability. He found that root growth angle had larger effects in drought-stressed environments. Samir Alahmad of the University of Queensland identified major quantitative trait loci (QTL) that present the opportunity to enhance yield under drought and crown rot conditions.

BGRI workshop participants at ICARDA’s Tassaout Station, which is an INRA experimental farm in Morocco.

However, as several presentations emphasized, one root system does not necessarily fit them all, and we have only scratched the surface regarding genetic control of roots. Matthew Reynolds of the International Maize and Wheat Improvement Center (CIMMYT) pointed out that deeper roots confer stress adaptation under drought. But deep roots are incredibly hard to measure, so we can also use canopy temperature as a proxy. Cooler canopy temperatures are associated with deeper roots, and canopy temperature can explain up to 50 percent of yield variation under stress conditions.

Other presenters highlighted the various technologies they used to complete their studies. The BGRI workshop had it all, from the “keep it simple and smart” approaches of “eyes and brain,” to the “comb and tweezer” method to separate roots, to “shovelomics” and the big data approaches of phenomics and genomics.

Among the promising developments in wheat research is that complex technologies are becoming cheaper and quicker. New technologies enable us to conduct studies and achieve results that were simply not possible before. For example, Sanu Arora of the John Innes Center (JIC) is utilizing a novel strategy using immune receptors and AgRenSeq to clone multiple resistance genes in a short amount of time. Antoine Persoons and Diane Saunders, also of JIC, presented on how field pathogenomics is enabling them to rapidly evaluate how pathogens behave in the field.

This application of new technologies was particularly evident during the keynote talk by Francisco Barro Losada, from Spain’s Institute for Sustainable Agriculture. His team is using CRISPR-Cas9 technology to reduce the expression of gliadin genes. They hope this will enable them to produce gluten free wheat that retains high breeding quality.

But gluten-free wheat is just one of the applications of CRISPR-Cas9 technology. Matthew Rouse’s team at USDA-ARS wants to use CRISPR/Cas9 to knock-out secalin so they can improve the end-use quality of lines with important rust resistant genes. As we heard several times, it does not matter how high-yielding or rust-resistant a variety might be: if it does not have the attributes demanded by consumers, farmers are not going to grow it, and this is something everyone needs to bear in mind when breeding improved varieties.

The theme of new technologies continued with overviews from Hans Braun, Ravi Singh, and Alexey Morgunov of CIMMYT on breeding for genetic gain and how the international wheat improvement network enables the wheat community to rapidly respond to new challenges. This network of breeding, along with advances in agronomy and public policy, produces enormous impacts not only in terms of improved food security and capacity building, but also in terms of the economic benefits, estimated at $2.1 to $5.7 billion dollars.

Several presenters mentioned how work done in the past, sometimes a long time ago, has been instrumental in their current studies. Tzion Fahima of the University of Haifa did her work on positional cloning of Yr15 based on mapping populations developed 25 years ago, while the primary synthetic panel used by Reynolds was generated by Mujeeb Kazi decades ago. One can only wonder which of the technologies, methods, or protocols described during the last few days will be used and quoted in conferences a couple of decades from now. 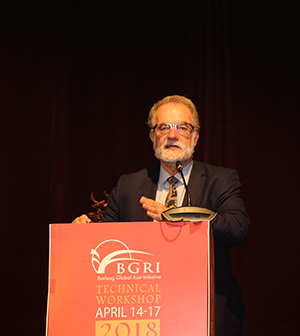 Philomin Juliana, of CIMMYT, asked how we can deliver future genetic gains in wheat — including improvement of grain yield and stem rust resistance — using genomic selection. Juliana showed us how within-population accuracies for predicting traits were around 0.4, but accuracy dropped to around 0.17 when predicting across populations. If genomic selection is to be successfully applied in wheat breeding programs, we will need to better understand G x E interactions and include traits that affect grain yield, such as lodging, in the models.

This links to the work being done by Suchismita Mondal and her team, also at CIMMYT, who are using high throughput data to investigate lodging and crop height estimations, among other traits, through the use of planes and drones. Thanks to a highly efficient collaboration with Kansas State University, they have been able to reduce the image processing and extraction stage of their phenomics process from around 7 months to 3-4 weeks, meaning that the extracted data is now available by the end of the wheat cycle. As this technology rapidly advances, they are looking at how they can use high-throughput methods in disease assessment.

Another new technology that can reduce the time it takes to get new varieties to farmers is speed breeding. The clue is in the name, but, as Lee Hickey of the Queensland Alliance for Agriculture and Food Innovation described, this revolutionary approach can be used to accelerate plants’ development and achieve up to six generations of wheat per year, compared to one or two generations under traditional or shuttle breeding systems. This duration could be reduced even further if speed breeding is combined with other technologies such as CRISPR. Further work needs to be done to reduce the costs of the large investments in infrastructure required, and several labs around the world are exploring this approach.

Still, no matter how advanced the technology we are using, at the end of the day, it’s about getting varieties into farmers’ fields. Zerihun Tadesse of the Ethiopian Institute of Agricultural Research highlighted the importance of this in Ethiopia, where demand for wheat is rapidly increasing, but where they have had big problems with recurrent rust epidemics. Through fast-track testing and release, accelerated seed multiplication, and scaling-up new technologies, they are working to replace susceptible varieties in farmers’ fields. As Braun said: “it’s not just about the breeding.” Promotion, collaboration, the involvement of the national seed system, and initiatives such as Nepal’s Seed Village Model play an important role in moving varieties from release to farmers’ fields.

There are so many stories of successes, impacts, and tricky problems that the dedicated people in this room and elsewhere continue trying to solve, I was surprised at how many people said “we don’t know!” in regard to an aspect of their research. But this is exciting, because everyone talked about their progress and the questions that this process of investigation and discovery inevitably raises. And almost everyone had some future strategy as to how they intend to find the answers to these questions.

As Les Szabo of the USDA-ARS said so eloquently: “Pgt is a shifty animal!” The work of solving the issues of rust and increasing genetic gains is not done yet.

Adapted from remarks delivered by Emma Quilligan, student at the Cornell Institute for Public Affairs, at the conclusion of the 2018 BGRI Technical Workshop in Marrakech, Morocco, April 14-17. Many thanks for her fine work.