The Borlaug Global Rust Initiative (BGRI) has achieved much in the last decade through its mission to reduce the world’s vulnerability to stem, yellow, and leaf rusts of wheat. It has brought people together in meetings like this, facilitated sustainable international partnerships to contain the threat of wheat rusts, and enhanced world productivity to withstand global threats to food security. We are incredibly lucky to have so many people here, with diverse nationalities, scientific backgrounds, genders, and ages.

Many presenters here are PhD students, with some of the posters having undergraduates as the lead author. Several people have commented on how differently this group looks compared to the original group 10 years ago. In fact, this year we had 333 participants from 51 countries, including 108 women. In the first BGRI conference in 2010, there were 178 participants, about 36 of whom were women. It is to everyone’s credit how this group has expanded so extensively.

However, the size of this group is evidence that the problem of rust has not gone away. As Dr. Borlaug famously said, “rust never sleeps.” Anna Berlin of the Swedish University of Agricultural Sciences reported on the apparent re-emergence of stem rust on wheat in Sweden. The last decade has presented challenges such as the emergence of new rust races, various biotic and abiotic stresses, and an increasingly erratic climate. Challenges have also come in the form of political circumstances and funding uncertainties. This was most apparent in Dr. Mahmoud el Solh’s talk about the dramatic civil unrest in Syria when he described relocating the International Center for Agricultural Research in the Dry Areas (ICARDA) and its gene bank, between 2012-16.

Furthermore, rust does not respect geographic borders. Mogens Hovmøller, from Aarhus University, showed how recent intercontinental spreads of yellow rust are causing new epidemics, with big problems in North and East Africa, and South America, among others.  We also heard reports of yellow rust infections on (non-inoculated) spreader rows in Ecuador from Charlie Barnes, of the National Institute of Agricultural Research.

New races of stem rust are also emerging. Whereas we used to focus on Ug99 or Digalu, this changed around 2013. Stem rust populations are very diverse; it’s now possible to detect eight or nine races in a sample from a single field. New virulence is emerging, and several races are causing big problems across many regions worldwide. In Siberia, for example, there has been a gradual increase of stem rust incidence in the last 5-7 years, and 90 percent of the varieties grown there are highly susceptible. We need good varieties to protect against these new races. Where resistant varieties are available, faster seed multiplication and adoption is required.

Dhouha Kthiri of the University of Saskatchewan warned us that the emergence of new leaf rust races is causing problems for durum production in the Canadian prairies. This is particularly important given Canada’s role as the world’s leading producer and exporter of durum wheat. She highlighted that there are fewer resistance genes identified in durum wheat than in bread wheat, and that virulence to one of the most popular Lr resistance genes has been detected. Kthiri is using KASP markers to genotype F8 recombinant inbred lines and develop linkage maps for Lr genes.

Marco Maccaferri from the University of Bologna talked about the work of his team on durum wheat and how, in collaboration with Kansas State University, he has successfully developed the Svevo-Whole-Genome Radiation Hybrid panel, the first of its kind. Meanwhile Sisay Alemu and his team, from the Ethiopian Institute of Agricultural Research, aimed to identify new sources of yellow rust resistance for durum wheat in Ethiopia, identifying a single significant Yr locus in Ethiopian landraces by phenotyping 300 landraces and released cultivars.

Many presenters mentioned the importance of collaboration, and the people and institutions without whom their work would not have been possible. This was clearly demonstrated by the number of people present on stage for the gene stewardship award from India — this was truly a team effort! Scientific research is “meant” to be collaborative, but the level of collaboration demonstrated here is far above the normal level because everyone is united around a common goal. 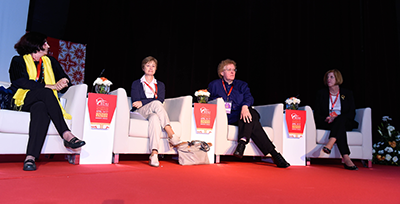 Collaborations also serve as an opportunity to share and develop skills and expertise. The panel session on “Women Speak Up: Building capacity in the pipeline” invited three female leaders in their field to talk about what got them into plant science and how younger generations should chart their careers. Lesley Boyd, who is Research Programme Leader and Head of National Institute of Agricultural Botany (NIAB) International, wanted to be a scientist from a young age, and highlighted the importance of gaining experience at different institutions in different countries. Meanwhile Wafaa El Khoury, from the Policy and Technical Advisory Division of the International Fund for Agricultural Development, emphasized the importance of being proactive and taking advantage of every opportunity, even when there are risks involved. She also reminded us that you have to be passionate about what you’re doing! This was clearly evidenced by the third panelist, Silvia German, who served as principal researcher at Uruguay’s National Agricultural Research Institute since 1979 and also won the 2017 Women in Triticum Mentor Award. Their comments and the lively discussion that followed were very informative for the early career people in the room.

As Pablo Olivera (University of Minnesota) and Les Szabo (USDA-ARS Cereal Disease Laboratory) highlighted, the emergence of Ug99 catalyzed the development of a solid surveillance system, with many partners working together. But the level of collaboration extends much further than surveillance. Dhouha talked about how maps were made available to her. And when Clemence Marchal of the John Innes Centre was conducting her work to show that Yr5 and Yr7 are closely linked genes, rather than true alleles, she mentioned that when they needed to clone Yr5, all the hard work had already been done for her by McGrann et al. Meanwhile, Boyd’s presentation reported on a collaboration that’s been going on for more than 10 years. 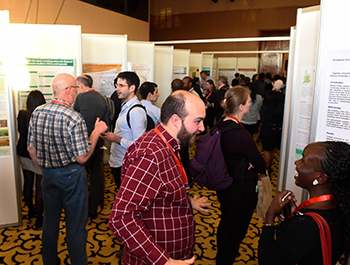 BGRI workshop participants had the opportunity to discuss research in lively poster sessions during the program. Photo by Chris Knight.

We need to ensure that these collaborations continue and even expand. When she started working on wheat rust, I’m not sure that Diane Saunders thought her work at the John Innes Centre might be affected by moths. But despite the historic barberry eradication schemes described by Radhika Bartaula, at the University of New Hampshire, people in the UK are now beginning to plant barberry to conserve a rare moth. Saunders now also works with conservation organizations as collaborators in protecting cereals from rust.

The when and the where of the next high-impact wheat rust race incursions are not known. And in order to mitigate their impact, we need effective, coordinated surveillance at all levels across cereals and alternative hosts in various regions, compilation of data from many sources, and — as Hovmøller emphasized in his talk about rust surveillance — we need to speak a “common language” and utilize shared facilities and resources.

Adapted from remarks delivered by Emma Quilligan, graduate student at the Cornell Institute for Public Affairs, at the conclusion of the 2018 BGRI Technical Workshop in Marrakech, Morocco, April 14-17, 2018.