Silvia Germán, from Uruguay, is principal researcher at the National Agricultural Research Institute (INIA) of Uruguay since 1979. She worked as a wheat and barley breeder, to finally focus in breeding for wheat disease resistance. Her research emphasis is on leaf and stem rusts, screening and surveillance of rusts races, pyramiding major and minor resistance genes and more recently, the incorporation of genomic tools to elucidate new sources of rusts resistance. She has emphasized the introgression of minor, durable rust resistance genes in adapted germplasm, combined with resistance to other important diseases such as fusarium head blight. 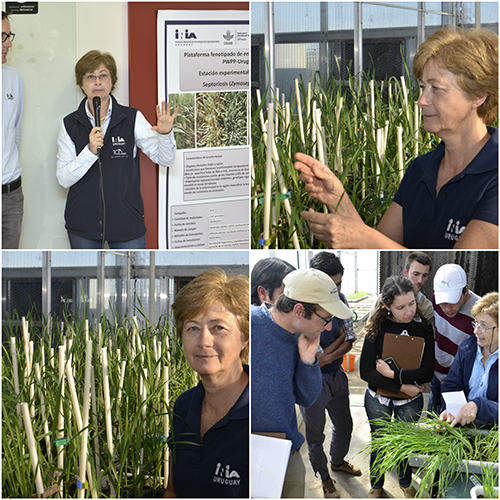 She is also a professor at the “Universidad de la República, Facultad de Agronomía”, Uruguay, where she got her Bachelor degree in Agronomy. She received her M. Sc. and Ph. D. degrees at the University of Manitoba, Canada. Silvia has scientific and technical publications in scientific journals, proceedings and other publications. She was responsible or collaborated with the release of 36 bread wheat cultivars and seven barley cultivars. She strongly believes in teamwork, put together a solid research program on wheat rusts and contributed to develop a great wheat research group where majority are women scientists, helping, promoting and supporting her co-workers scientifically and socially. Silvia has been engaged in international cooperation and has collaborated to represent research interests and challenges of Uruguay and Latin America as well.

Silvia has trained and supervised young scientists, Ph.D. and M.Sc. students on the field of plant pathology, genetics and breeding, some of which are currently working in research institutions in Uruguay or other countries. She especially encouraged this generation of women in particular, to pursue their career in agriculture research. Thus, she is very proud to see that two of her female students have been hired by INIA in part to continue the research areas she has been involved with. One of these students, Paula Silva, commented: “In the time I was a student with Silvia, she has been instrumental in demonstrating how not only to do good science but be a good scientist. She prioritizes her students’ needs to ensure that they will ultimately be successful in the entirety of their future careers”.