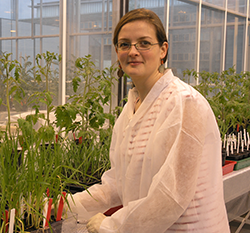 Sarrah Ben M’Barek-Ben Romdhane, from Tunisia, completed her Ph.D. in Plant Pathology at Wageningen University and Research Centre, The Netherlands under Pr. Gert Kema. She explored the genome structure and pathogenicity factors of Zymoseptoria tritici, a world-wide devastating fungus causing Septoria tritici Blotch disease (STB). She was awarded a UNESCO-L’Oréal fellowship for her Ph.D. work and is a recipient of the Ritzema-Bos Award for Excellence of the Royal Netherlands Society for Plant Pathology. Sarrah later joined the Biotechnology Center of Borj Cédria, Tunisia, as a researcher/assistant-professor in the Laboratory of Molecular Plant Physiology. Since 2015, Sarrah has become an active member of the Wheat-CRP Tunisia-Septoria Precision Phenotyping Platform led by CIMMYT. that has the role to generate and share data and knowledge on Z. tritici that represents a major threat in Tunisia. Sarrah said, “My passion and commitment to the development of agriculture through exploring ways to increase yield, having more resistant varieties and ultimately eradicate hunger is genuine. I have to admit that being a woman, a mother and a scientist is definitely challenging particularly in a post-revolution country who recently embraced democracy, but we certainly have a crucial role in the scientific development of the country.” 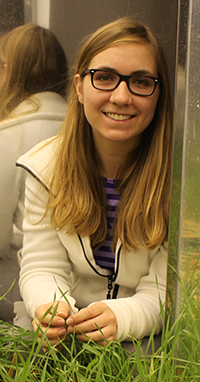 Margaret Krause, from the United States, is a Ph.D. candidate in Plant Breeding at Cornell University in Ithaca, New York. Upon the completion of her undergraduate degree in 2014, Margaret began graduate studies with Mark Sorrells and Michael Gore at Cornell, where she is a National Science Foundation Graduate Research Fellow. Currently, Margaret is serving as a U.S. Borlaug Fellow in Global Security at the International Maize and Wheat Improvement Center in El Batán and Ciudad Obregón, Mexico. There she is working with the Bread Wheat Breeding Program to evaluate selection methods that utilize aerial images collected from airplanes and drones. Through the Women in Triticum network, Margaret looks forward to learning from a dynamic group of women working in wheat. “I [am] dedicated to building a career in agricultural research for development…By interacting with researchers and practitioners who are implementing development solutions around the globe, I hope to form relationships that will grow into research collaborations in the near future as I begin my career in agricultural research for development upon completing my degree.” 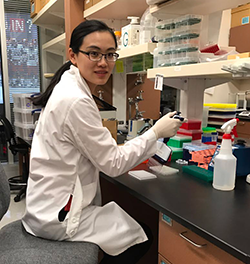 Weizhen Liu, of China, is currently a postdoctoral research associate working with Michael Pumphrey and Arron Carter at Washington State University. Her research is to identify and characterize resistance germplasm and resistance genes against stripe rust of wheat (Puccinia striiformis f. sp. tritici) by genome-wide association mapping and QTL mapping in tetraploid (emmer wheat and durum wheat) and hexaploid bread wheat. Weizhen received her Bachelor of Science degree in Biotechnology from Nanjing Agricultural University, China, in 2011. She then joined the Spring Wheat Genetics and Breeding Program for her Ph.D. degree under the supervision of Pumphrey and was awarded her Ph.D. degree in July 2016. Her thesis focused on molecular characterization of stripe rust resistance in tetraploid wheat using genome-wide association study. Weizhen said, “I am eager to join and devote myself to improving wheat yields by fighting against wheat rusts…I can share my identification of resistance loci and DNA markers with other scientists and receive the most professional feedback, which are beneficial to improving my academic skills. And the international collaborations can be built with the leading wheat rust scientists.” 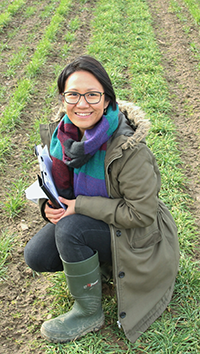 Tine Thach, from Denmark, completed her PhD in plant pathology at Aarhus University, Denmark under Pr. Mogens Hovmøller. She recovered and explored wheat stripe rust (Puccinia striiformis) diversity in the past utilizing isolates from the historic “Stubbs collection”, now hosted by the Global Rust Reference Center (GRRC). Currently, Tine is a postdoctoral researcher at GRRC and part of a public-private partnership with a Danish breeding company. She manages large-scale field trials to test breeding lines against important wheat diseases for multiple disease resistance. Tine also conducted SSR genotyping of stripe rust for early warning in Denmark and monitoring of stripe rust in international collaboration. Tine has experience with plant pathology from collaborations with Nordic Beet Research A/S, Denmark, BASF A/S, Germany, and Department of Primary Industries, Victoria, Australia. Her bachelor thesis was presented and awarded a prize at “15 minutes of brain 2008,” a competition held at University of Copenhagen. Tine enthused, “I think that by working together and joining forces we can push things further to benefit the farmers and in the end, achieve the overall goal to ensure global and sustainable wheat production.” 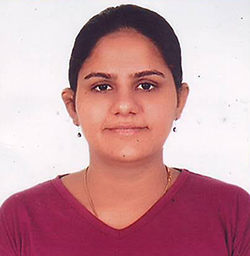 Ritika Chowdhary, of India, is a plant physiologist and biotechnologist pursuing her PhD at the University of Sydney. Her current PhD work is under the supervision of Dr. Richard Richards and Dr. Greg Rebetzke, of the Commonwealth Scientific and Industrial Research Organization, (CSIRO) and Prof. Richard Trethowan, The University of Sydney, with help of Dr. Ravish Chatrath, Dr. Sai Parshad and Dr. Satish Mishra. She possesses a keen interest in plant physiology and its integration with breeding and biotechnology and would like to explore this interaction at a practical level. Ritika is interested in providing advice to farmers on the best conditions for sowing to avoid stress, ways to prevent disease and cultivar choice. She also wants to learn how to interact with other scientists, particularly breeders, to explain her inexpensive and easily implemented techniques for screening for high-temperature tolerance. She looks forward to her role as a WIT, particularly the opportunity “to find creative new approaches for the economic development for our region, particularly in the areas of crop production and agricultural sustainability.”