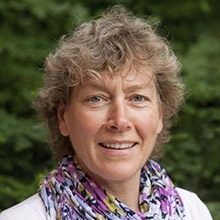 Ruth has served on the faculty of the Department of Plant Pathology at the University of Minnesota for over 26 years. Her research program, focused on the diseases of cereal crops, is internationally recognized for work on Fusarium head blight (FHB or scab). Ruth has conducted research on net blotch of barley, loose smut of oat, and the root rots of cereals, while maintaining an interest in the rusts she studied as a PhD student. Recently, Ruth’s research program expanded to include work on bacterial leaf streak of wheat and barley. Ruth’s interests in plant pathology are in the management of plant diseases through the deployment of host resistance, cultural control practices, and plant disease epidemiology.

Ruth began her faculty career facing the challenge of working on FHB, following the reemergence of this devastating disease of wheat and barley in the U.S. Her research has contributed to the efforts to develop best management practices for the control of FHB through examining the effect of host, pathogen and environmental factors on the development of FHB and on the accumulation of Fusarium-associated mycotoxins and the role of crop residues in FHB epidemics.

Ruth has advised seven graduate students through to the completion of their degrees and served on the graduate committees of over 60 other graduate students and post-doctoral scientists. The students she has advised or mentored have gone on to establish productive careers in industry or academia that utilize their training in the plant sciences. Ruth is still in regular contact with many of her former graduate students. Ruth also serves as a mentor for undergraduate students in the Plant Sciences major and, on a less formal basis, for junior faculty and staff over her career.

Currently, Ruth serves as the researcher co-chair of the United States Wheat and Barley Scab Initiative (USWBSI). In this role she provides leadership to a national consortium of wheat and barley research scientists, producers and industry representatives who together form the USWBSI which aims to enhance food safety and supply by reducing the impact of FHB on wheat and barley. 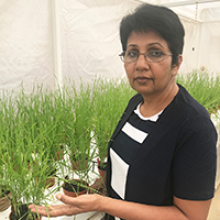 Dr. Bansal leads in the development and validation of molecular markers linked with rust resistance genes in wheat. She is a Molecular Geneticist at the University of Sydney Plant Breeding Institute (PBI), Cobbitty. She completed PhD in Genetics from the Punjab Agricultural University (PAU), Ludhiana, India. Urmil worked as Associate Professor of Genetics in India before joining PBI in a GRDC Australia funded Australian Winter Cereal Molecular Marker Program. She worked extensively on discovery and mapping of new rust resistance genes in wheat. Urmil developed and validated closely linked markers for more than 20 rust resistance genes to facilitate marker-assisted pyramiding in order to achieve durable control of rust diseases in wheat. These marker-tagged sources of rust resistance are being used by wheat breeders worldwide.&nbsp; Urmil has mentored 29 M.Sc. and Ph.D. students and 16 were females. A majority of her students were from developing countries including South Asia and Africa. Many of the students supervised by Urmil are working in international wheat breeding programs. She also mentored one of the 2014 Women in Triticum (WIT) winner, Dr Naeela Qureshi, and is currently supervising five Ph.D. students. In addition to her Australian collaborations with AgriBio Victoria, CSIRO and various breeding companies, Urmil has wide collaborative network that includes leading laboratories in Switzerland, Czech Republic, USA, UK, India and international wheat breeding centres CIMMYT and ICARDA. Urmil is a prolific writer and she has published more than ninety research papers in leading international journals. Urmil’s efforts on training next generation human resource and enabling technologies to achieve food security through combating rust diseases is highly valued by the Australian and the global wheat community. Urmil’s next goal is to use gene-editing technologies to increase farm-gate returns for wheat growers. 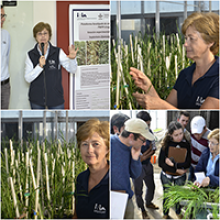 Silvia Germán, from Uruguay, is principal researcher at the National Agricultural Research Institute (INIA) of Uruguay since 1979. She worked as a wheat and barley breeder, to finally focus in breeding for wheat disease resistance. Her research emphasis is on leaf and stem rusts, screening and surveillance of rusts races, pyramiding major and minor resistance genes and more recently, the incorporation of genomic tools to elucidate new sources of rusts resistance. She has emphasized the introgression of minor, durable rust resistance genes in adapted germplasm, combined with resistance to other important diseases such as fusarium head blight.

She is also a professor at the “Universidad de la República, Facultad de Agronomía”, Uruguay, where she got her Bachelor degree in Agronomy. She received her M. Sc. and Ph. D. degrees at the University of Manitoba, Canada. Silvia has scientific and technical publications in scientific journals, proceedings and other publications. She was responsible or collaborated with the release of 36 bread wheat cultivars and seven barley cultivars. She strongly believes in teamwork, put together a solid research program on wheat rusts and contributed to develop a great wheat research group where majority are women scientists, helping, promoting and supporting her co-workers scientifically and socially. Silvia has been engaged in international cooperation and has collaborated to represent research interests and challenges of Uruguay and Latin America as well. 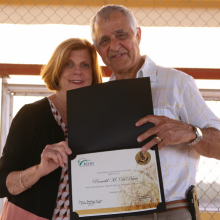 DePauw is a research scientist in Wheat Breeding at Agriculture and Agri-Food Canada. His distinguished career has produced over 200 scientific manuscripts, 50 cultivars developed and culminated with election to the Canadian Agricultural Hall of Fame in 2015.  He has served as mentor to many female researchers, including three Women in Triticum Early Career Awardees, Arti Singh (2013), Samia Berraies (2013), and Silvia Barcellos Rosa (2011). Dr. Berraies said “His progressive and encouraging attitude influenced greatly the trajectory of my research work and reminded me of the true reason behind wheat research. With the cereal group. Dr. Ron's attitude towards the technical staff is gender-unbiased both in and out of the field, and he strives to deliver as much information as possible to his staff. He accomplishes that not by saying many words but simply by treating everyone the same, assigning the same tasks to women and men and generally expecting great work.”

DePauw donated the $3,000 cash prize to FINCA International, an organization dedicated to providing women with microloans. FINCA International provides subsidiaries to over one and half million people in 23 countries across Africa, Eurasia, the Middle East and South Asia, and Latin America. 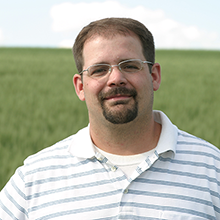 His program works regularly with the Ethiopian Institute of Agricultural Research, and has contributed to practical training in applied field breeding, Ethiopian germplasm characterization, and staff training.  His research on rust resistance genetics has resulted in the discovery of several new sources of resistance to stem and stripe rust, and he has contributed to the release of 12 wheat varieties and genetic stocks to date.

Michael's WIT mentor award funds are being donated to the "Dr. Virginia Lee Change the World Fellowship" at Washington State University.  This fund was created in 2011 in honor of his first graduate student at WSU who died from a rare and aggressive cancer in 2010, and supports female PhD students in their pursuit of Virginia’s fundamental interests in integrative, equitable and sustainable food systems through advances in plant sciences. 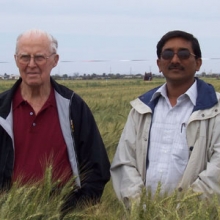 Arun Joshi, India, is a principal scientist and the South-Asia Regional Coordinator for CIMMYT’s Global Wheat Program in Kathmandu, Nepal. Joshi is also a professor of genetics and plant breeding at Banaras Hindu University, Varanasi, India. Joshi mentored 2014 WIT winner Chhavi Tiwari as well as many women students and colleagues working in Triticum. His colleague at the Nepal Agricultural Research Council, Sarala Sharma, said, “The visionary leadership of Dr. Joshi has enhanced collaboration of the Nepal wheat team with international partners. He fully understands the significance of feminization of agriculture in Nepal and showed very positive attitude in supporting women farmers, scientists and students.”  Joshi has made numerous contributions to wheat improvement research by facilitating development of around three dozen rust resistant wheat varieties. He has identified genes/QTLs for wheat rusts, spot blotch, stay green traits, and heat and drought tolerance. His research findings are published in 111 refereed journal articles; 8 books, book chapters, and reviews, and 65 symposia proceedings. He holds one patent. Joshi has trained three dozen Masters and PhD students in his career, twelve of whom are women. Many of these students occupy important positions in national and international agriculture networks. 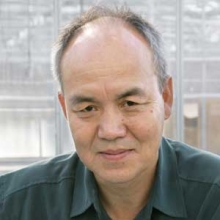 Yue Jin, from the U.S., excels in both the realms of research and training. He has worked extensively to promote gender parity in agriculture by actively engaging in training women and men within regions where tremendous barriers to gender equity exist in science.  Yue Jin served as a mentor to 2010 Jeanie WIT award winner, Maricelis Acevedo, now a junior faculty member at North Dakota State University, and he hired plant pathologist Maria Newcombe, a 2012 WIT award winner, to join the USDA-Cereal Disease Lab in St. Paul Minnesota. Dr. Jin realized early on that a worldwide cooperative effort was needed to effectively respond to the Ug99 crisis. He developed close ties to Dr. Ruth Wanyera at KARI, Njoro Kenya, bringing her to the CDL to learn race identification and handling techniques. According to Martin Carson, retired research leader at the CDL, “Regardless of gender, race, or nationality, Dr. Jin works with whom ever is willing to get the job done. Yue Jin is truly a hardworking, humble man who only seeks to help others with his expertise. He has set high standards for those he has mentored, but none higher than those he has set for himself.” 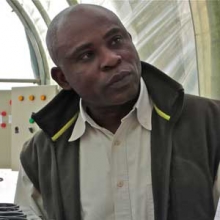 Francis Chuks Ogbonnaya, from Nigeria, is recognized by the BGRI for his support of women in agriculture. He “believes that women have a greater role to play in the world through their contribution with men in agricultural field… achieved through educating women and giving them all the tools necessary” said Ms. Awatif A. Faragalla in her nominating letter for Francis. He joined the Grain Research and Development Corporation, Canberra, Australia in 2012 as manager for protection traits. His background is in plant breeding, genetics and molecular biology with major interest in the use of genetic resources for improving biotic and abiotic stresses limiting crop production. He obtained a degree in crop science from the University of Nigeria, and his PhD in plant breeding and genetics from the University of Melbourne. Francis used his WIT Mentor Award to create a fund to provide on-going scholarships for orphaned female undergraduates to complete their studies, and is initially targeting Nigeria for this work. 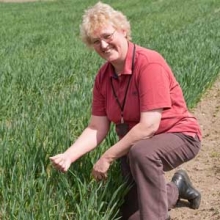 Lesley Boyd is recognized by the BGRI for the support she gives to young female researchers in cereal sciences. As a scientist, she is passionate about her own research and instinctively supports the research and passion for science in others, female and male, young and more mature. “Passions should be nurtured, not trampled,” says Lesley. Currently, Lesley is research group leader and cereal rust pathologist at the John Innes Centre (JIC), in Norwich, UK, where she investigates the genetics and modes of action of resistance in wheat to fungal diseases that include yellow rust, stem rust and blast of wheat. Her work covers both aspects of classical genetics of durable forms of disease resistance in wheat, as well as molecular and cellular dissection of the mechanisms behind resistance, including non-host resistance.