Guest Author: Cristobal Uauy - Understanding the pathogen's side of the story 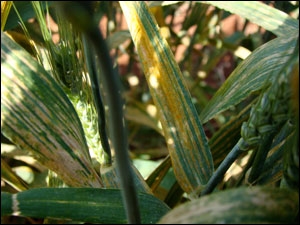 Yellow rust on wheat
Wheat yellow rust, caused by the fungus Puccinia striiformis (PST), was recently dubbed one of "wheat's worst enemies" and continues to be a major threat to global food security. The appearance of new and more aggressive PST strains at the beginning of the 21st century and their rapid spread pose an increasing global threat to wheat production, and have resulted in severe yield losses in recent years.

The most economic and environmentally sustainable way to fight yellow rust is by developing wheat varieties that are genetically resistant to the disease. To date, pathologists and breeders have focused on the plant’s side of the story by deploying resistance genes into new varieties. However, our lack of knowledge of the pathogen's biology and how it evolves to overcome resistance genes has meant that we've been fighting with one hand tied behind our backs.

Recent innovations in sequencing technologies, combined with increased knowledge of pathogens in other species, provide us with the unprecedented opportunity to start understanding what makes yellow rust such a devastating disease. In our project we will use these new technologies to access the complete DNA sequence of multiple strains of the yellow rust pathogen. We will sequence the most current PST strains from Ethiopia, Kenya, India and the UK and also go back in time by sequencing historic collections of yellow rust. These strains, which until now have been stored in the cold across labs around the world, tell the story of how the pathogen has changed in history to become more aggressive and overcome wheat varieties that were once resistant.

Sequencing will allow us to identify these changes at the DNA level. Understanding and interpreting these changes will provide the context of how wheat varieties and the fungus have co-evolved across three continents. This information will constitute a very powerful framework to identify wheat genes that will stand a better chance at maintaining their resistance against yellow rust in the future. Importantly, all DNA data will be made publicly available to the community through the www.yellowrust.com website. We will use this knowledge to characterize and introduce new sources of yellow rust resistance into modern wheat varieties which are adapted to the different environments. Through this work, we also seek to create new partnerships between researchers and enhance the scientific capabilities of all partners.