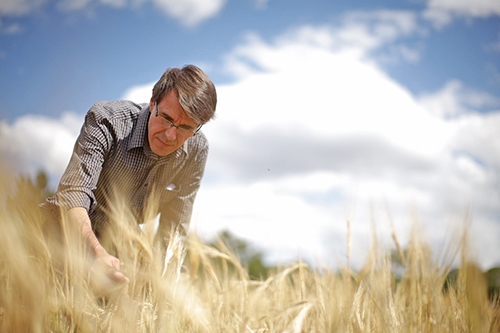 “The nominating credentials of each institution were so strong that the selection committee couldn’t pick one. Their spirit of collaboration was the inspiration for combining the nominations into one award,” said Sarah Evanega, associate director of the Durable Rust Resistance in Wheat project, and adjunct professor of plant breeding at Cornell University. “So much great work is being done at these Australian institutions. Their expertise, their collaborative spirit and their recognition of the importance of developing durably resistant varieties serve as an inspiration for rust scientists all over the world. With this award, we gratefully recognize the efforts of the Australian Cereal Rust Control Team.”

Wheat rust, a fungal pathogen, significantly reduces crop yields and, in the case of stem rust, can destroy entire wheat fields. Scientists work to develop new varieties of wheat that have genetic resistance to rust by deploying specific rust resistant genes as barriers against rust. As an analogy, think of resistance genes as a locked door, refusing entry to rust even as pathogens constantly evolve to develop keys to unlock those doors. Once rust pathogens unlock a door, or overcome a resistance gene, they never forget how to open that particular door. And so that gene is forever removed from wheat breeders’ toolboxes.

One method the Australian researchers employ to create durably resistant varieties is to “stack” multiple genes together, building a stronger barrier for rust to overcome. In effect, if rust is able to unlock the door, it finds another locked door behind it. The deployment of wheat varieties with stacked resistance genes helps ensure that each new variety will remain immune to the ravages of rust for longer periods of time.
The Australian team also utilizes molecular markers to simplify the process of creating varieties with disease resistance in addition to higher yields and other desirable traits.

“The collaborative nature of the three institutions is similar to resistance genes: working together they accomplish more good than one alone,” said Evanega.
The Borlaug Global Rust Initiative, founded in 2005 by Nobel Peace Prize laureate Norman Borlaug, is an international collaborative effort to fight wheat rust. The BGRI would like to thank the Australian Grains Research and Development Corporation for long-term support of Australian Cereal Rust Control Program.